The owner of a 7 year-old Maltese risked her life, and paid a hefty ransom to secure the safe return of her kidnapped dog after she received a terrifying photograph of the animal with a gun pointing at its head.

Emily Connors dog Plato was taken from her Lindbergh apartment on August 15th during a raid that also saw the theft of her TV, laptop, and other electronics,

Connors says she knew something was terribly wrong as soon as she stepped into her home that day. “She usually runs up to me when I walk in and she didn’t come running up to me.”

A day later, she received a phonecall from the thieves and discovered her dog was still alive but in danger. “And he says, I got your dog and it’s going to cost you $3,000 to get her back,” she said.

A series of intimidating texts followed, including one where the criminals threatened to harm the 7 year-old dog, but it was the photograph of Plato being held at gunpoint that really scared his owner.

Atlanta police also believed the picture was evidence that they were dealing with a serious criminal, but Connors felt she couldn’t wait any more time for them to organise a response.

Frightened for her pet’s safety she managed to convince the kidnappers to reduce the ransom to $1000 and arranged to meet in front of her bank on busy Cheshire Bridge Road. “And he just strolled up like nothing was going on with the dog completely enclosed in the backpack,” she said.

Connors said there was a lot of discussion about whether the money or the dog should be handed over first. “I said show me the dog and he kind of opened it a little and she stuck her nose out and she saw me,” Connors said. “She got really excited. 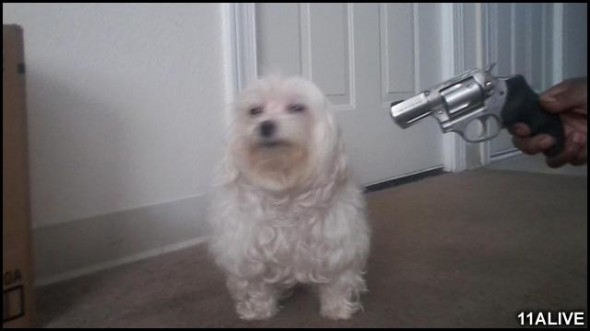 She got so excited Connors said Plato jumped out of the backpack. At the same time the suspect grabbed the envelope of cash from Connors hands. “I was just relieved to get my dog back,” Connors said.

Though she placed herself in great personal danger, Connors believes anybody with a dog would understand her actions. “I would do anything for my pet, I love her,” she said. “She’s part of my family and she is unconditional love.”

Atlanta Police say this crime is very rare, but they are taking it seriously. If you have any information, please contact Crime Stoppers Atlanta at 404-577-8477.