Many of the 50 dogs saved from a cruel Bronx dog fighting ring in June will be available to be adopted by the public, the ASPCA announced yesterday.

The dogs, pit bulls and pit bull mixes ranging from puppies to adults, were rescued in late June from a nightmarish basement in the Bronx, where, according to the ASPCA and the Bronx district attorney’s office, they were forced to fight each other.So far, 26 of the dogs have been placed with animal welfare groups throughout the Northeast, and placement options for an additional seven dogs are being finalized. In total, 33 dogs will be up for adoption.

After being rescued, the dogs required two months of care. They had been traumatized by the fighting and in addition to medical care and a proper diet, required extensive socialization at a temporary shelter.

Sadly, 17 of the dogs could not be rehabilitated and were euthanized.

When the ASPCA and the NYPD conducted the raid on June 21, they found 50 dogs held in the dingy, dark basement of a six-story apartment building in the Bronx. The dogs were forced to live in crude cages in the corner room of a cellar and rarely — if ever — saw the light of day, unless they were brought outside to be trained or to fight on the streets.

Doggie treadmills had been set up, and harnesses, muzzles and syringes lay scattered on the floor. There was also a shopping cart full of raw chicken parts in the cellar, which officials said was fed to the canines. 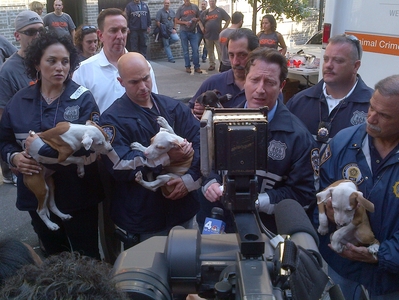 Adopt One of These Dogs 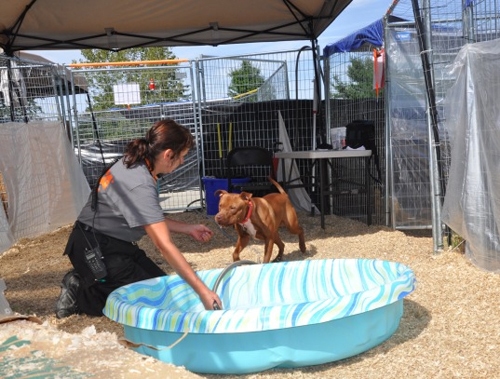 The superintendent of the building, Raul Sanchez, was arrested the same day as the raid. He has been charged with 63 counts of animal fighting as well as various counts of aggravated animal cruelty, and possession of a weapon.

If convicted, he faces up to four years in jail