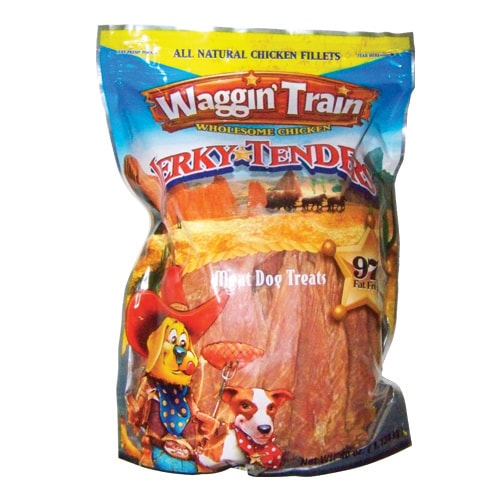 In response to the number of comments we received today on the post entitled “Toxic Treats Continue to Take Lives,” we would like readers to have more information on the subject.  Though similar articles have been posted in the past, this is an important current issue that needs attention.

A number of complaints have recently been filed with the FDA concerning Chinese-manufactured dog treats.  Dog owners claim the chicken jerky snacks have caused their dogs to become ill or even die.

Sellwood Dog Supply Manager Kathleen Kramer comments, “Seven or eight dogs got very sick a few weeks ago; we all heard about it and it was a pretty big scare.”

While the FDA has issued three warnings within the several weeks, no recalls have been enforced.  They have been unable to determine the source of the deadly products, as many of the Chinese factories producing them have not allowed the FDA to test their products.  This response alone is prompting many to question why a recall has not been made mandatory.

Tony Corbo of Food and Water Watch says, “I’m going to be very blunt; I think food safety is being trumped by our trade policies.”

An animal food safety law was signed by President Obama last year, but has yet to be truly put into action.

Some of the symptoms seen by dog owners include a decrease in appetite and activity, vomiting, diarrhea, and an increase in water consumption and urination, which may occur within a few hours or days of consumption.  However, these symptoms are not unique and can present in any number of other health issues, which is why many people may have failed to recognize the cause of their dogs’ sudden poor health.  Kidney failure may be the disease these symptoms indicate, but it is unclear if there is a strong correlation between the treats and the sickness.  Kidney disease can also be a latent genetic malady or the result of injury.

Since 2007, the FDA has taken a number of chicken, duck and sweet potato jerky samples to test for toxins, bacteria, and metal contamination.  They have not reported finding anything noteworthy (which would likely lead to a recall), but recommend discontinuing feeding pets these treats should any of the above-listed symptoms occur.

If it is not just coincidental, and these jerky strips really are to blame, we need to unite and see that these products are banned.  The FDA cannot accomplish this alone.  If dog lovers all make their voices heard about this critical issue, it may be possible to have legislation passed that would enforce stricter testing of what we feed our dogs.

Below is the petition created by Rita Desollar after her beloved dog, Heidi, died prematurely.