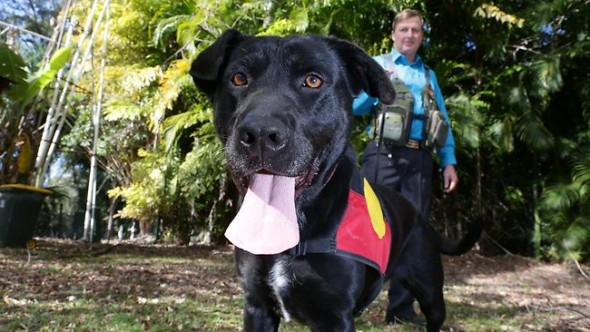 Migaloo, a three year-old black lab mix, is being touted as the world’s first trained canine archeologist.  After over six months of training, she recently sniffed out 600 year-old Aboriginal skeletal remains buried six and a half feet deep in a burial mound on Yorke Peninsula in South Australia.

“She’s got an amazing nose, with a strong drive,” Jackson said.  “The dog is hitting bone fragment with 100 percent certainty every time.”

She broke the previous human bone discovery record set 25 years ago by Bill Tolhurst’s dog Candy, on an archeological dig site of the 1814 Battle of Snake Hill near Fort Erie, Ontario.  Migaloo has beaten a record by 425 years.

“What on earth is that dog picking up on?  What is left to sniff?” wondered Griggs.

Dogs have amazing olfactory capabilities.  They are able to detect cancer, oncoming seizures, lost children, people buried in snow, and cell phones in prison.  This is because while humans have about 5 million scent receptors in our puny nasal passages, dogs can fit hundreds of millions of scent receptors in their sizable schnozzes!

It is likely that other dogs will now be trained to search for the ancient remains in archeological excavations.

“We can all see the potential commercial applications in finding animal or human remains going back hundreds and thousands of years; it is just astounding,” Griggs stated.

Bud Streten, Red Centre Consultancy director, and owner of Migaloo, said he plans to use her to find and protect ancient burial grounds across Australia.  There isn’t any one tool that can be used to locate buried human remains.  That is, except Migaloo.  Her reward?  Not a bone, but a game of fetch.