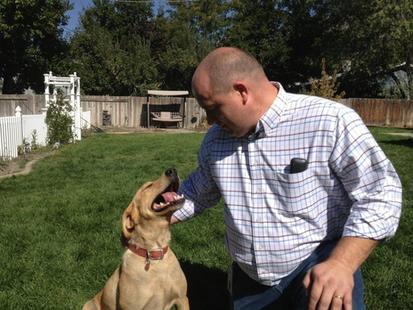 When Bruce Gardner received a phone call from his home in Orem, Utah at 9 a.m. on Wednesday morning he was a little surprised. “I knew nobody was home, so I answered it,” he said. “I said, ‘Hello,’ and all I could hear in the background was all this rustling noise. I wasn’t quite sure what it was.” Gardner became concerned as it sounded like someone was robbing his home and contacted police. He informed police that he heard “banging around, rifling around and some scratching.” He asked if they could send some officers over to his home to check out the situation.

When officers arrived at Gardner’s home they didn’t find anyone. Everything in the home was in its place and nothing appeared to be missing. There were no signs of forced entry either. They then looked for the phone that had called Gardner. They were unable to locate it so the police left since there were no signs of a crime.

Later that night, Gardner was with his 4-year-old yellow lab Maya in the backyard when he decided to try calling his home number to see if the phone was in the backyard. “I called it, and I could hear the ring. I started going toward the sound and found it out here in the garden,” Gardner said.

Turns out there was never a burglar at Gardner’s home, but Maya had found the portable phone, chewed it and buried it. “She must have hit redial, and what I could hear was her playing with this phone and chewing the phone up,” Gardner said. Gardner contacted police to let them know what had really happened and to apologize to the officers. Orem Police Sgt. Craig Martinez said, “It’s pretty comical to say the least. He thinks it’s as funny as we do.”