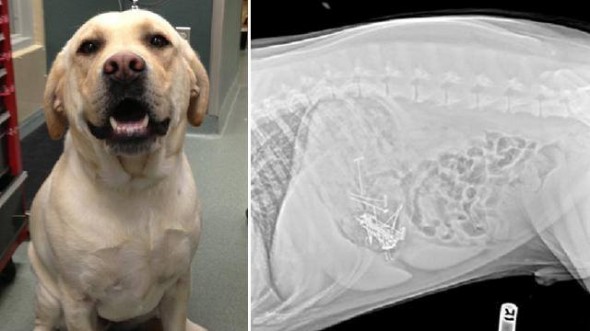 My dog ate my homework is one of the oldest excuses in the book, but for one 13-year-old girl it was true. Her 2-year-old yellow lab ate her homework and had to be rushed into emergency surgery because of it.

13-year-old Peyton Moody constructed a volcano out of candy for a science project. While the family was out of the house at Peyton’s brother’s football game their dog Reggie proceeded to knock the volcano off a desk and help himself to every piece of candy.

Not only did Reggie ingest all of the candy, but the pins that had attached the candy to the foam base of the project. When his family returned home from the football game they realized what happened and the danger their dog was in.

Reggie was rushed to an emergency animal hospital where an x-ray revealed 50 pins inside of him along with a large amount of chocolate. He was quickly taken in for emergency surgery. The majority of the pins the surgeon was able to remove with an endoscope down Reggie’s throat, but five of the pins had to be removed surgically.

Reggie has made a full recovery from his homework eating adventure. In addition, Peyton reconstructed her volcano, using glue this time, and was an awarded an A on her project.