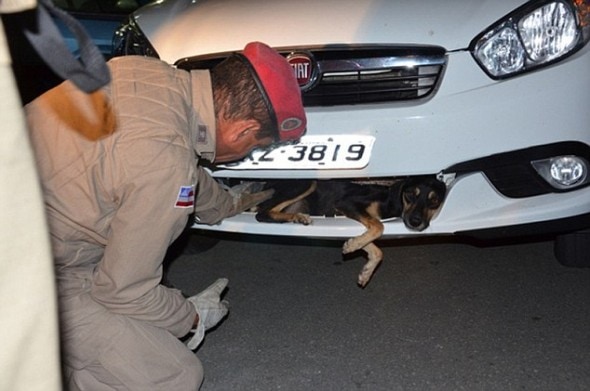 A Brazilian dog is lucky to be alive today after she was hit by a car and became trapped in the car’s front bumper grille for 55 miles before the driver became aware.

A student named Julia Cesar Siqueira was driving to his university when he spotted the dog in the road and swerved to avoid it, unfortunately he was unable to avoid hitting the dog.

“I heard a thud, and realized I’d hit it,” said Siqueira.

Traveling on a dangerous road Siqueira didn’t feel it was safe to stop.

“I was traveling at speed and knew it could have survived the collision, so I kept driving,” said Siqueira.

He had no idea the dog was actually stuck in his car’s front bumper grille.

For fifty-five miles the dog rode in the grille until Siqueira reached his University. As he approached the University people began waving at him trying to alert him to the fact that a dog was stuck in his car.

“Someone told me there was a dog on the front of my car, so we went to look, imagining it was dead,” said Siqueira. “We couldn’t believe it when she appeared to still be alive and conscious. The force of the collision had smashed the front panel and she was trapped in the body of the car.”

Help was called and Firefighters and a local veterinarian arrived on the scene to help the dog. After being freed from the car’s grill and checked over she was found to have a broken leg but was otherwise doing well.

The dog is now being cared for at a local veterinary clinic and Siqueira has agreed to pay for all of her treatment.