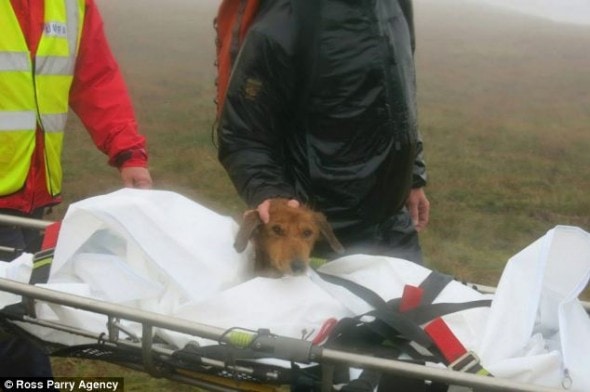 For three weeks a dog was stranded in the Yorkshire Dales with a broken leg after rescuers believe the dog chased a rabbit up the hill.

A local walker noticed the stranded dog close to the summit of Buckden Pike on Saturday and called mountain rescuers for help. Eight members of the Upper Wharfedale Fell Rescue Association responded to the scene and carefully brought the emaciated and injured dog down the mountain in a stretcher.

“He was so camouflaged he was probably hard to see,” said team leader Andy Jackson. “Fortunately, he was on the side that was protected from the worst of the weather. When we eventually moved him, we put him into a casualty bag and on to the stretcher.”

The dog, which the rescue team nicknamed Wufra, had been stranded so long that the grass had started to die where he had been.

“He was happy to see us. He just had nothing in him,” said Jackson. “There was a lot of bone. He was obviously a thin dog anyway, but it looked like he hadn’t eaten. I don’t think he would have been able to stand up. He was quite happy to be picked up, kept warm and seemed to quite enjoy his trip down in the stretcher.”

Once safely down the mountain, Wufra was taken to The Dog People, a training center. They are looking after him until he gets healthy.

“At the moment we are just taking care of him, making sure he gets rest and food. He’s eating now, and drinking and starting to walk around a bit,” said Helen Coates from the center. “We’ll look after him here until he’s better. Hopefully his rightful owner will turn up to collect him. But if not, he might become part of the family.”