Caroline Reed from Australia was out walking with her husband when they stumbled upon an old, 20 meter deep mine shaft. The woman decided to yell into it expecting to hear her echo – and who knows maybe find gold – but instead she found a dog.

The canine, a kelpie, had been out walking with its owner, Greg Curtis, when it suddenly disappeared, but fortunately Reed was there at the right time to discover and help rescue the dog.

Firefighters were called to the scene and they used ropes to lower a firefighter down the mine shaft to retrieve the pet. Improvising, the hero men used a tote bag to secure the dog and safely raise it to safe ground. 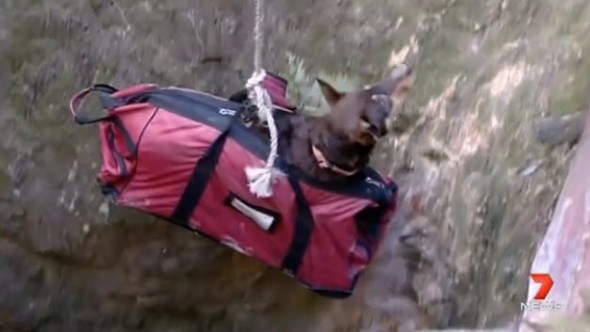 Veterinarian Ruth Taylor was also present at the rescue scene. She checked the dog and concluded that it had not suffered any injuries. The dog was just in shock.

Soon after the pet was rescued, it was reunited with Curtis who was more than glad to see his pet alive.

The dog owner had been looking for his companion animal and was a bit hesitant to go back home without the pet. The dog owner was unsure on how to tell his wife their pet had gone missing. Luckily, both Curtis and the dog made the trip back home together.