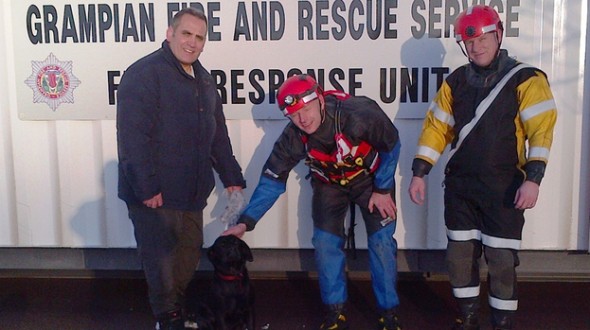 Firefighters in Scotland worked tirelessly for two hours to rescue a black Labrador that had fallen 40 feet off an embankment and became stuck in trees overhanging a river.

Maisie’s owners were taking her and their other dog Molly for a walk along the Logie Estate river walk in Scotland when she disappeared. “Maisie ran off and because it had been snowing, we were able to follow her footprints to the edge of the cliff, which is where they stopped,” said Maisie’s owners.  “We knew she had fallen down and we could hear her, but we couldn’t see her due to the sheer drop.” Maisie’s owners called for help, but feared the worst when Maisie stopped making noise.

The Elgin and Forres fire stations sent four units to the scene and were able to locate Maisie. She had fallen  down a 40 foot embankment and become stuck in tree branches that were overhanging the river. The rescue operation took two hours. Two officers had to enter the water and swim to Maisie to bring her to safety. “We are the only team in the region qualified to carry out rescues in moving water,” said Elgin Fire Station watch manager David Farquharson. “So it was lucky this incident happened nearby as we were able to reach them quite quickly.”

The rescue was complicated because of where Maisie was located. “Limited access made this rescue difficult,” said Farquharson. “We couldn’t go over the side of the cliff as it was sheer drop so the best route was across the water. Two men went into the river and climbed up onto a ledge to reach the dog.” When the rescuers reached Maisie they calmed her down before swimming her safely down the river.

Once Maisie was brought to safety Animal rescue officers were on hand to make sure she was okay. “The fire and rescue service contacted us to assist in the operation as there was a very high risk that she could have sustained serious injury as a result of the fall,” said animal rescue officer Peter Boulton. “After a tremendous effort by the rescue services in attendance, Maisie was successfully retrieved and a check over revealed that she was completely unharmed although visibly shaken.”