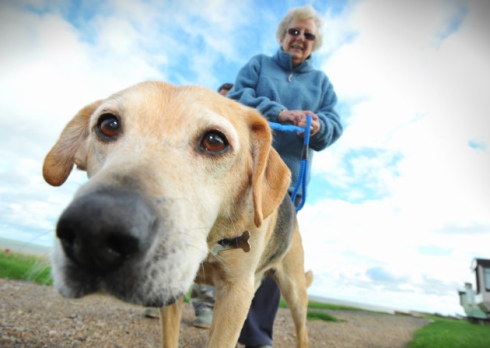 The coastguard came to the rescue of a dog named Max after he fell almost 40 feet off a cliff while out for a walk with his owner.

Terence Woodcock was walking Max on a path along the cliffs of Happisburgh in England. Max was on his leash, but suddenly Terence felt the leash go taught and heavy and then limp. Terence pulled the lead in and Max’s collar was attached but Max had slipped out of the collar.

Max had fallen over the cliffs and was now 30 to 40 feet below. The coastguard was called into help and arrived 15 minutes later. It was now dark out and the tide was coming in, no one was sure if Max was ok or not.  The coastguard set up equipment to allow them to look over the edge and try to spot Max.

“The coastguard had all these big lights up,” said Jean Woodcock, Terence’s wife. “They started calling him and all of a sudden the man said: ‘He’s there’. Max had run to the bottom of the cliff but then he ran away again. The coastguard said: ‘He’s OK. He’s running.’ It was such a relief.”

The coastguard then tried to reach Max by using the beach ramp but the tide had cut them off, the coastguard was going to have rescue Max by scaling down the cliff. Two rescuers were lowered down the cliff with Max’s leash, collar and some of his favorite treats.

They successfully put Max’s leash on and then brought him safely up the cliff.

“He just jumped out of the bag as if nothing had happened and we all made a fuss of him,” said Jean. “He’s been utterly spoiled ever since. He slept on the bed, even though he was a bit muddy.”

Max had a slight limp but was otherwise uninjured from his fall. By the next morning his limp was almost gone.

The Woodcocks are extremely thankful for the help of the coastguard, who would not accept a donation from the couple. So instead the couple plans to donate to the Sea Pailing Lifeboat, a charitable-funded volunteer rescue service.