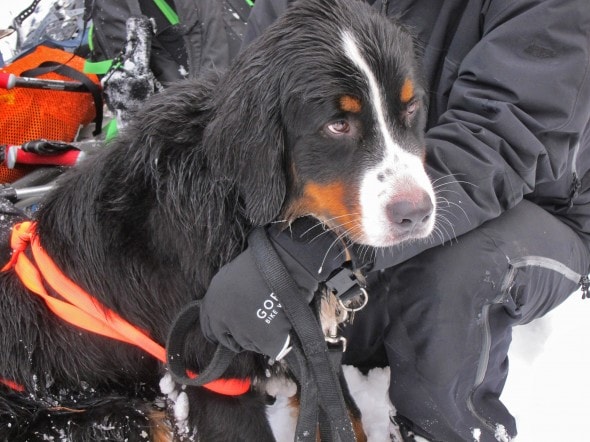 After spending 13 days missing in dangerous terrain near Mount Seymour in Vancouver, Ohly was rescued Saturday afternoon and reunited with his family the Goads.

On November 25th, a friend of the Goads took Ohly for a walk with his own dog. Ohly got spooked and took off from the parking lot of the Mount Seymour ski resort. Stephen Goad said Ohly was on a leash but broke away. During the nearly two weeks he was missing, the Goads and even complete strangers were looking for the two-year-old Bernese mountain dog. The Goads posted flyers and made a Facebook group to assist with finding Ohly.

On Thursday Ohly was spotted in an area known as Suicide Gulley. The area is steep and slippery and prone to avalanches. “As soon as Suicide Gully got involved, I knew we couldn’t go down there,” said Goad. Searchers were able to get close to Ohly on Thursday  but he kept running away. North Shore Search and Rescue became concerned about untrained citizens venturing into the dangerous area looking for the dog. They got involved to make sure the rescue of Ohly was done safely for all involved. .

On Saturday rescuers spotted Ohly in a deep ravine. A seven member team from North Shore Search and Rescue accompanied by Stephen Goad went into Suicide Gully to rescue Ohly. After several hours rescuers were able to bring Ohly to safety. “This has been a very difficult day for our team…but we persevered and got the job done,” said Tim Jones with North Shore Search and Rescue. “We rescued the dog from a very, very steep cliff area.” A vet examined Ohly after his rescue and found him to be dehydrated but in good condition.

The cost of the rescue, which totaled close to $7,000, has been covered thanks to public donations. “Thank you to all the volunteers, Facebook supporters, and North Shore Search and Rescue for bringing Ohly home,” the Goad family posted on Facebook,” Best Christmas present ever.”