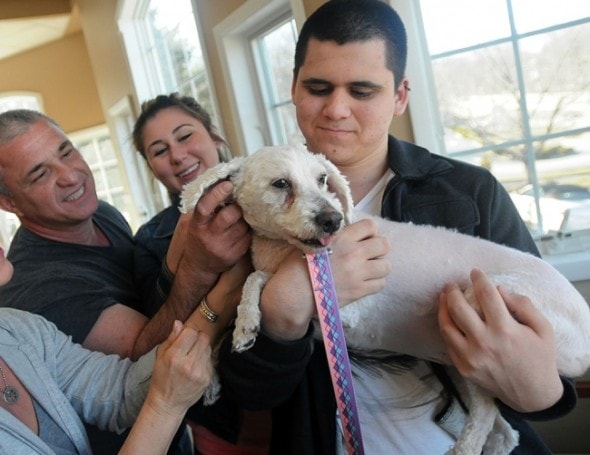 Two weeks ago, a white poodle mix had been found and rescued from midway up a cliff face, at Garret Mountain Park, New Jersey.  Now, she has a new name and new, loving home and family.

A volunteer had to rappel down with a dog snare in order to carry her up to safety.  There had been about 26 Paterson firefighters and a number of Passaic County Sheriff’s Deputies and Paterson animal control.  When she was finally brought to the Animal Clinic of Morris Plains, the coiled, matted hair had to be removed, and an infection in her eyes had to be treated, but now, she’s doing quite well.

On Sunday, the sixth or April, Paul DiFalco and his family came to the animal clinic, and met the “real” dog under all that mess.

“She looks like an Easter bunny with the red skin,” Paul DiFalco had said.

Easter, as she is now called, had been let out of her cage to meet them, and they hit it off.

Cheryl DiFalco, Paul’s wife, was stroking her neck telling her, “Yes I do love you,” and each of her two children took turns holding and playing with her.  Just to reassure, she also turned to their nine-year-old miniature schnauzer, Ashes, and said, “Mommy still loves you too.”

Mrs. DiFalco went on to say “Just the fact that the dog was found the way it was. My heart broke and I just said, ‘I know we can give that dog a good home.’”

Cheryl had called the Second Chance Pet Adoption League, which had been handling her adoption, and had left a message.  She was one of 50 people to call regarding Easter, and there were ten applications to adopt were made on her behalf.  The Morris Plains clinic is one place dozens of animals that are needing homes are taken to before rehabbing and being adopted out by Second Chance.

DiFalco even brought their own dog into to meet Easter, to see if they’d get along, the week of the rescue.  They got on famously.

The DiFalco’s were chosen because they live close to the clinic, and have someone home all day to be with her.

As they entered the clinic, as a family on Sunday, they weren’t positive what they would name her.  Easter was popular, but they also liked the name Lucky.  Paul DiFalco had suggested “Cliff” because of where she was found.

“If it was a guy, maybe,” his daughter Alesandra had said.