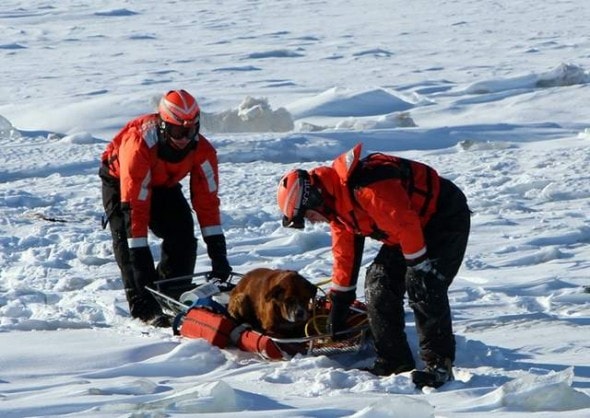 The Coast Guard came to the rescue of a lost and scared dog on the ice of frozen Lake St. Clair about four to five miles off shore. The dog, named KC, had been missing from his home since last month.

The crew of the Bristol Bay, a 140-foot cutter, was heading to help another vessel stuck in the ice on Monday when they spotted a dog on the ice. Three members of the crew quickly put on weather-resistant gear and headed out on the ice to help him.

“We couldn’t just leave him out there,” said Lt. Commander John Henry.

The crew is used to seeing wildlife out on the ice, such as deer and foxes, but never dogs. They dog was four to five miles away from land and was clearly in distress.

“It was cold, weak and tired,” said Chief Petty Officer Alan Haraf. “It may have been out there for a couple days or so. They noticed three burrows the dog tried to dig for itself for protection. They said the paws were bleeding and the nails were pretty much down to nothing.”

The crew brought KC safely on board and gave him food and water. They also administered first aid and when the crew pulled into its home port in Detroit on Tuesday one of the crew members took the dog to a veterinarian. KC had a harness and collar on, but no tags.

Jodi Benchich saw a TV news report about the rescue and quickly recognized the dog. KC had been missing since late February and on Wednesday Benchich and her father went to the shelter for a happy reunion. As soon as KC saw Benchich he began wagging his tail and licking her face.

KC has a bandage on his right leg and had to receive intravenous fluids but he is expected to recover fully. The Benchich’s plan to spoil KC with some extra treats at home and made an important phone call to his heroes.

“As soon as I found out the Coast guard saved him, I called them and thanked them like crazy,” said Benchich.