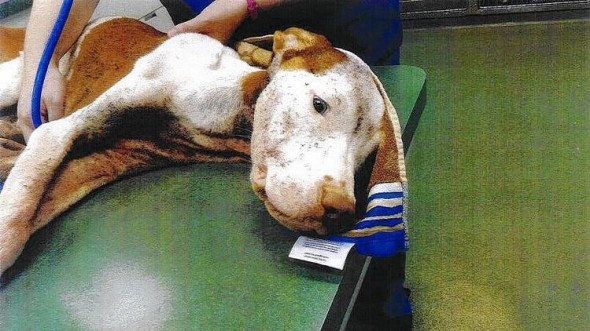 Zola the pit bull was living in some of the worst conditions Orange County Animal Services had ever seen.  Forced to lay on a floor covered in feces and soaked in urine, and unbelievably underweight, Zola needed rescuing in the worst way.

After becoming aware of Zola’s living conditions, a concerned citizen called animal control services this past Thursday.  The dog’s former owner, Aaron Dennis of Winter Park, was arrested on third-degree animal cruelty charges.  He was taken in for processing, but later was bailed out.

According to the caller, Dennis had abandoned both the dog and the apartment in which he had been living.  However, when law enforcement and animal control showed up, he was there.  He claimed to have left the dog for three days without food, and when he returned, the dog was in the shape it was found to be in.

Dennis also claims that the dog has been rapidly losing weight since January, but hasn’t yet taken the dog in for medical care.  He believed he wouldn’t be in any trouble for the state Zola was in, because it was “just a dog.”

Zola is still in the care of animal control while the recovery process takes place.  She is improving, but at a very slow pace.

“Both staff and veterinary workers are hoping she will make it through this ordeal,” said officials in a press release.