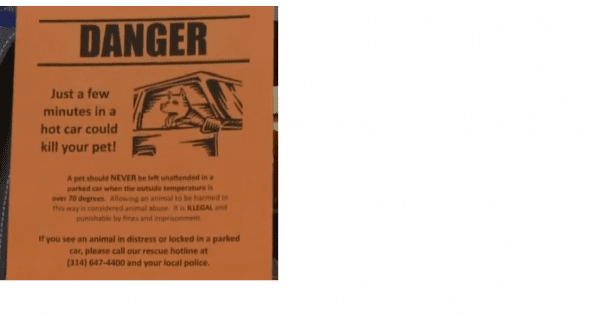 While the weather on Tuesday in St. Louis was great for outdoor activities, like visiting the local zoo, it’s never a good day for leaving your dog in a parked car in the heat for a long period of time.

Tuesday morning, a dog left in a hot parked car in the lot of the zoo had to be rescued.  There was a small bowl of water left in the car for the dog.  This is all according to Jeane Jae, an HSMO (Humane Society of Missouri) spokesperson.

Police with the St. Louis Metropolitan Police Department were able to get into the car through a window.  This allowed them to remove the dog, and leave a notice on the windshield advising the owner they need to contact the Humane Society.

Temperatures outside the car were only about 68 degrees.  For some reason, people seem to forget parking in the sun causes the temperature in the car to be exceedingly higher.  In this case, it was approximately 104 degrees!

The dog is expected to be fine, and has been returned to its owner.  When picking up the dog, the owners were given a strict warning from the HSMO and the Animal Cruelty Task Force before being allowed to take the dog home.

The Humane Society and police everywhere want to remind pet owners to never leave their pets in a parked car when it’s close to 70 degrees out.  Doing so is not only cruel, but inhumane and illegal, often resulting in permanent brain damage or damage to other organs, and can even kill your pet, even if you just think you’ll be less than a couple of minutes.

People are urged to contact their local Humane Society or any Animal Abuse Hotlines if they see a pet left in a hot car this summer.  Let’s pay attention, and make sure our furry family members have a safe, happy, healthy and play-filled summer, and many more to come.