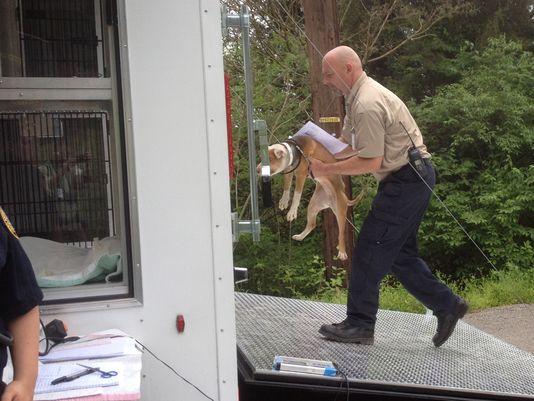 Most of the dog were pit bulls, ranging from puppies to full grown.  Some were chained to trees between the two homes.  Many of the dogs looked sickly, emaciated, scarred and some even had some very nasty wounds, clearly from fighting.

As some of the traumatized dogs had to be carried out one by one in the arms of special officers and animal control, they were seen by veterinarians, whom were greeted by much tail wagging.

“They appeared to be starved for human contact,” police spokesman Don Aaron. “They were very friendly, they were jumping up, they were happy to see some human attention.”

A site owned by the city will be a holding location for the dogs.  There are no plans to release the dogs as of yet, considering they are still a part of the ongoing investigation into the individuals responsible for the fighting ring, but should be available once they are cleared by the court.

Discovery of the dog fighting ring actually came from a very large investigation into a massive heroin and cocaine trafficking organization.  One of the owners of the homes containing the dogs was owned by a suspect in the drug investigation, Michael A Davis, 34.  While the officers had been looking for evidence of drug trafficking, the chained up dogs were found, amid spent drug needles, suspected to be used to inject the dogs with steroids.  There were also many other pieces of equipment used to train and breed fighting dogs.

Searching Davis’ home lead to a search of next door neighbor James Jones’ home as well.  That search turned up dog exercise equipment, a jumper cable, and $234,950 in cash buried in the yard.  Jones, 35, said he had no clue about the cash found on his property.

Investigators and the district attorney are now working on who will get what charges in these crimes. They are also asking for help with donations to care for the found dogs.  To donate, you can contact Adam Tamburin at 615-726-5986 or on Twitter @tamburintweets.