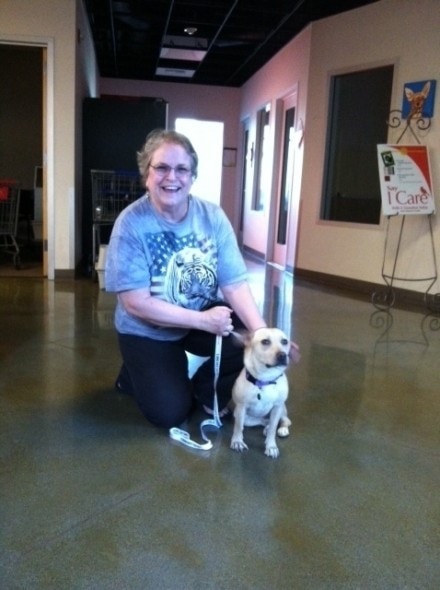 A dog rescued from a Sacramento storm drain last month after being bound and abandoned has found a forever home.

A Sacramento firefighter had to lower himself 15 feet to the bottom a storm drain after witnesses saw someone force the small dog down the storm drain on June 23rd. When the firefighter reached the frightened dog he discovered the dog’s hind legs were bound with a bicycle lock.

As news of the rescue spread interest in the dog started coming in from animal lovers all over. One of those animal lovers was Vicki Korsak.

“I really wasn’t aggressively looking for a dog,” said Korsak. “But she was so gentle-looking when she was with the reporter. I knew that was the dog for me.”

Korsak made sure to be first in line at the shelter on Saturday when the dog became available for adoption. The dog was initially called Stormie by the shelter due to her rescue, but Korsak renamed her Honey because of her sweet nature.

“She is actually very forgiving and accepting, as are many animals that we encounter that have been abused,” said Sacramento County Animal Care and Regulation employee Tara Diller.

Despite Honey’s ordeal she has been incredibly sweet to everyone she meets. Honey is a one-year-old mutt that the shelter believes to be part Corgi. She is settling in well to her new home with Korsak and even though some people who have heard Honey’s story feel she is lucky to have found a good home, Korsak doesn’t see it that way.