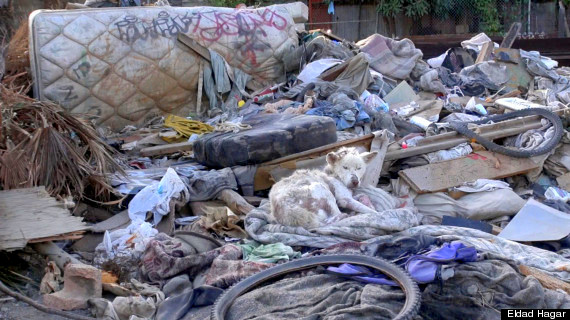 Eldad Hagar’s heart broke when he saw Miley, a dog living in a pile of trash outside of LA. She was so ill and weak that she didn’t even try to run away. But because of a friendship she made with another rescued dog, she is doing worlds better today.

“When I got there, I almost couldn’t believe what I was seeing,” said Hope For Paws the founder. “It’s almost as if this place was struck by a tsunami.”

The dog, called Miley, had been abandoned and left to die in the garbage. A local resident called Hope for Paws to tell them the dog had been living in the heap for a few months. Eldad knew what to expect, but was still surprised to see how bad off she was. He said her physical deterioration was “definitely one of the worst cases” he’d ever seen.

She was hungry, sick and in pain. Her body was left so weakened that she “didn’t even have the energy” to try to get away from Eldad when he approached her.

The abandoned dogs Hope for Paws volunteers find are usually difficult to rescue. They have been abused and on their own for a long time, and have become wary of humans. But with patience and compassion, even the most petrified dogs can learn to trust.

Eldad spent an hour sitting with Miley, gaining her trust by offering bits of food. He put his lucky leash on her, but she was scared and didn’t want to leave the only place that was now home to her. Eventually, she relented, and got into his vehicle. 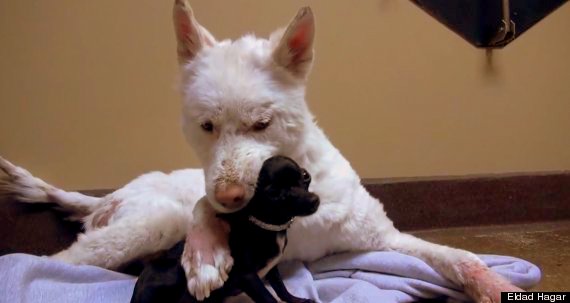 Veterinarians determined Miley was suffering from malnutrition, mange, parasites and bacterial infections. She was given medicated baths and had her wounds treated. She needed time to rest and heal.

By day three, she was ready to give her hero a kiss. A couple weeks later she met Frankie, a dog rescued from a drain pipe. He was scared of everything. But Miley and Frankie became the best of friends, and helped each other heal from their trauma.