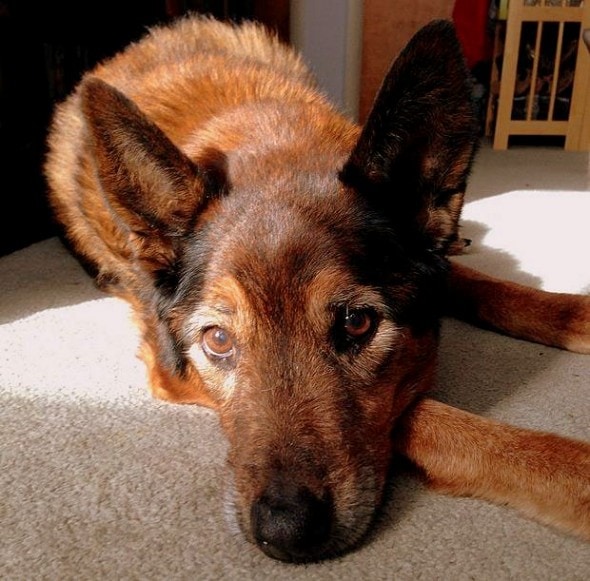 Nikki was a mutt. Everyone would always ask what kind of dog she was, and we never had a good answer besides that. Eventually, we kind of figured out that she had some German shepherd in her, maybe a smidgen of Rottweiler, probably a good bit of Australian blue heeler. But she was her own beast — absolutely one of a kind.

More than 14 years ago, I went to the Humane Society and walked through a cacophony of barking, leaping insane dogs and found one puppy indifferent to the chaos, curled up in the corner of the pen, one eye cocked at me. She had a beautiful reddish-brown coat and one floppy ear.

I took her home a few days later, and I’ll be damned if she didn’t have me conned. Despite her stitches from being fixed, she wiggled under my arm and into my lap on the way home. She was rambunctious, a bundle of positive energy. She never really destroyed anything of consequence, except a pair of my roommate’s expensive (of course) eyeglasses one fateful day. (He moved out not long after that. For the glasses, and other reasons. Don’t worry, we have long since reconciled.)

I named her Nikki, because she reminded me of a fun, excitable pooch once belonging to the family of my close friend, Jeremy Hirsch. One of the great ironies of Nikki’s character was the lone trick she’d do for a dog biscuit. Roll over? Nope. Shake hands? Uh-uh. This kinetic and vivacious dog would sit still as a statue with a treat on her snout until I said go, then SNAP! She’d snatch the treat out of the air. 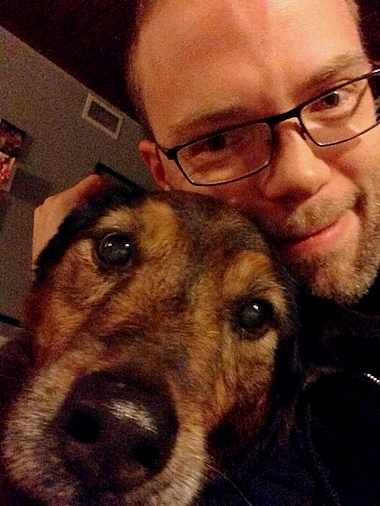 She just wanted to play, play, play. She loved people. She’d wear you out with her persistence, shoving a sloppy, drooly toy in your lap. She always wanted to be by your feet. She would romp endlessly with her best friend Madie, another mutt, owned by our friends and neighbors Brian and Sue Bakkila. Madie would chase the tennis ball, and Nikki would chase her. They’d play The Bone Game, swapping rawhide chews by some arcane canine rules we never understood. We used to say Nik-Nik and Mad-dog were lovers, because when they finally calmed down, they’d lie on the floor and lick each other’s faces.

Her instinct would kick in when we’d take her hiking — she’d woof to herd us together if anyone got too far ahead of the rest of the group. One such camping trip found Nikki and me cuddled together, shivering in a tent on a 20-degree night on the Manistee River Trail. During that outing, she was excited by anything that moved, except the raccoon that got into our food that night.

Nikki was a sweet, affectionate creature who wouldn’t hurt a fly. She would bark at the neighbor kids, and I told them not to be afraid, that she was only saying hello, and it was the truth. She just wanted to be everybody’s friend. When our cats would tussle, she’d run over and break it up. She never even really chased the cats, she’d just play with them, but never too rough. In fact, after living with four cats, who cycled in and out of the house over the years, I think Nikki wanted to be like them so she’d fit in. She’d paw at her toys like Moby, Maggie, Ozzie or Gus would swat at a dangling string.

Over the years, Nikki was as loyal and loving as a dog could be. She bonded tightly with my parents, who couldn’t see her without spoiling her with toys and treats. One of her favorite activities was going for a walk with my dad. She was glued to my side. I would stand next to her, and she’d lean on my legs, which is how she would hug me. We knew she was slowing down when she became indifferent to the cat chaos, and the arthritis in her hind end made it harder for her to get on her feet. After a long, long happy life, she died in my arms Monday morning, at home, with my wife Stacy by my side. We still don’t know what she was exactly. She was just Nikki. I think I prefer it that way.

John Serba is film critic and entertainment reporter for MLive and The Grand Rapids Press. Email him at [email protected] or follow him on Twitter or Facebook.  This article originally appeared on www.mlive.com

4 thoughts on “The Story of Nikki: John Serba’s Tribute to His Dearly Departed Dog”