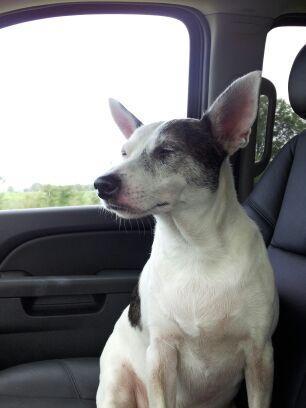 T’Chen, a dog who was lost in Hurricane Isaac, is currently being taken care of by the Humane Society Animal Shelter in Geneseo, Illinois. T’Chen was rescued in Baton Rouge, Louisiana. Thanks to the help of Facebook T’Chen’s owner has been located, now she needs help getting back to her home in Baton Rouge.

T’Chen ended up in Illinois thanks to the person who rescued her. A woman who fosters kittens for the Illinois shelter has a husband in the Army Corps. Her husband was in Baton Rouge cleaning up after the hurricane. He came across T’Chen when he thought he almost hit her. Thankfully she was not hurt and he went to the local police to ask for help. The local police were no help though. “They actually told him to throw the dog out of the car,” said shelter manager Rebecca Johnson. With all the shelters in Louisiana full, the man called the shelter in Illinois that he knew would take her.

Rebecca Johnson didn’t hesitate when the man called. “I took her from the moment he called me and said she’s staying with us. We’re kind of full right now but you know what she needs is to be with us where she’s safe and where she’s comfortable,” Johnson said.

Thanks to a Facebook page called “Lost pets of Baton Rouge” the shelter was able to locate T’Chen’s owner. T’Chen belonged to an elderly man who was relieved to find out his beloved dog was safe even if she was hundreds of miles away in Illinois. Now that her owner has been located, the shelter is trying to figure out how to logistically get T’Chen reunited with him. The shelter is working with an organization called Pilots N Paws, which flies lost dogs back to their owners. They need to raise $300 to $500 to cover the cost of fuel in order to fly T’Chen home. The shelter is hopeful that they can get the money raised and fly T’Chen home by the end of this month.

Anyone who would like to help and donate can send in a donation to the Geneseo Animal Shelter, PO Box 145, Geneseo, IL 61245. You can also donate on the Henry County Humane Society’s Facebook page at http://www.facebook.com/HenryCountyHumaneSocietyGeneseoIL or at their website www.geneseoanimalshelter.com