*UPDATE: The Morton Report has retracted the article that was the basis for this post after being hacked by an internet prankster. It sounds as though they are considering legal action. Sigh. In the good news department, we can all stop worrying about Maggie. 😉

The deadly currents of a flooded Washington river proved no match for the love of a devoted family pet when a dog came to the rescue of a drowning child.

A Ridgefield, Washington family very nearly lost their daughter on August 17th. Marie and Tom Morgan and their 6-year-old daughter Taylor were walking their dog, Maggie, near the Lewis River when Taylor picked up a rock and ran toward the river to throw it. The river was raging from recent flooding, and as Taylor neared the water’s edge the bank she was standing on let go, collapsing into the river and taking her with it. 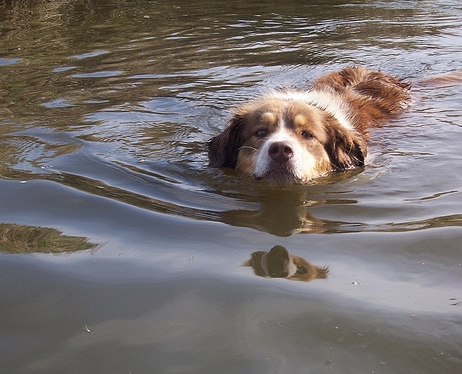 Tom Morgan said he watched in horror as the waters swept his daughter away. In an interview with the The Morton Report he said, “I couldn’t keep up with her, the water was too quick. I was running as fast as I could along the edge when Maggie bolted past me for about 30 yards and then leaped into the river. I lost sight of both of them for a second and then I saw Maggie with Taylor’s jacket collar in her mouth trying to swim towards the bank. The river took them down about another hundred yards before Maggie was able to reach the bank. Even though they went under a few times she didn’t let go once. If it hadn’t been for Maggie, we would have lost our daughter.”

As unbelievable as that may seem, the Morgans were not the only witnesses to the incredible rescue. An eyewitness was jogging and by was incredulous at the sight of Maggie dragging Taylor out of the water.

“The dog sprinted and jumped about 12 feet out into the river just in front of the child. They both went under and when they came up the dog had her jacket in its mouth and was dragging her to the bank. The dad ran into the water’s edge and grabbed the other side of the child’s jacket and they both dragged her up onto the grass. I have never seen anything like it.”

The Morton Report also interviewed local police Sergeant Michael Brodie, who said, “I have never heard of a dog jumping into a river to save a child before. The family is very lucky to own a dog with this degree of devotion. When I took the report at the family’s home, the dog sat there looking back and forth between me and Taylor and I could sense something extremely unusual between them.”

Amazingly, Maggie has come to Taylor’s rescue previously. Morton said, “Maggie never lets her out of her sight. About two years ago she rushed into the house, breaking the screen, barking as if she had gone crazy. She is usually very gentle and quiet. When my wife and I rushed to see what was happening she ran out into the yard where we found Taylor lying on the grass having trouble breathing. She had been stung on the neck and is highly allergic to bees.”

Making this wonderful tale of devotion even sweeter is the fact that Maggie is adopted. “We visited an animal shelter and were walking down a row of cages and all the other dogs were either barking or running around but one was just sitting quietly in the middle of its cage as if waiting and Taylor stopped and said, “Hello Maggie, we’re taking you home.”

The police department has nominated Maggie for a Commendation of Bravery award, but this is where her story takes a sad turn. Maggie may not be alive to receive it.

“We found out last month that Maggie has been diagnosed with Hemangiosarcoma cancer and will not be with us in a few months; we haven’t told Taylor yet as she will be devastated. It will be the hardest thing we have ever had to do. The two have an inseparable bond that is based on real love. We owe our daughter’s life to her.”