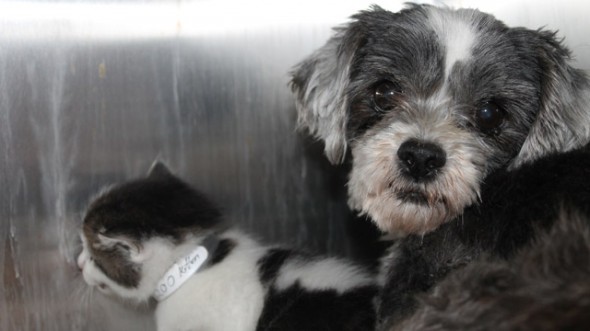 When Animal Control in Anderson, South Carolina received a call on Monday morning about a barking dog what they found was something special. The dog wasn’t alone; she was caring for and nursing a small kitten that she likely saved from a nearby ravine.

On Monday morning a call came in to Animal Control about a dog that had been barking since Saturday morning. Animal Control Officer Michele Smith responded and followed the dog’s bark down an embankment. She wasn’t expecting the dog to have company.

The dog was found caring for a kitten that is only a few weeks old. The dog has been treating the kitten as if it were her own pup. She cleans, tends to and even nurses the kitten. The dog was healthy but had been unwilling to leave the kitten behind.

“I think it would’ve been OK for the dog to walk down the hill. I got down there, so it should be pretty easy for the dog, but I’m thinking it just couldn’t get back up with the kitten, and I don’t think it was willing to leave the kitten,” said Smith.

PAWS animal rescue in Anderson, South Carolina has taken the pair in. They believe the dog to be around 5-years-old. They believe she is someone’s pet as she is freshly groomed and was wearing a collar. They will hold the dog for 14 days to give the dog’s family time to find her. After the 14 day holding period the pair will be put up for adoption.