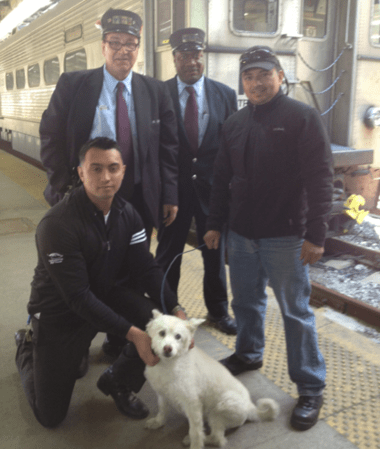 When Sparky got loose from his owner, he ended up in serious danger when he made his way to the railroad tracks. Luckily for Sparky, NJ Transit workers not only spotted him in time to stop their train, they got off the train and rescued him and later reunited him with his owner.

The crew aboard train 1254 was headed for Hoboken Tuesday morning when they spotted Sparky, an American Eskimo dog cowering by the tracks. The crew pulled the brakes on and stopped the train and then got out to help the dog.

“The crew broth the dog, who they dubbed ‘Lucky,’ on the train with them to Hoboken Terminal,” said NJ Transit Spokesperson Courtney Carroll.

Sparky rode the train all the way to Hoboken and was a big hit with passengers who were snapping pictures of him with their cell phones. NJ Transit then got in contact with Garfield police to try to track down the dog’s owner. Sparky had gotten loose fromYvette Osorio, who luckily had been also calling around to shelters and police trying to track down her lost dog.

“I’m very thankful for everyone who helped my Sparky, my little lucky one,” said Osorio.