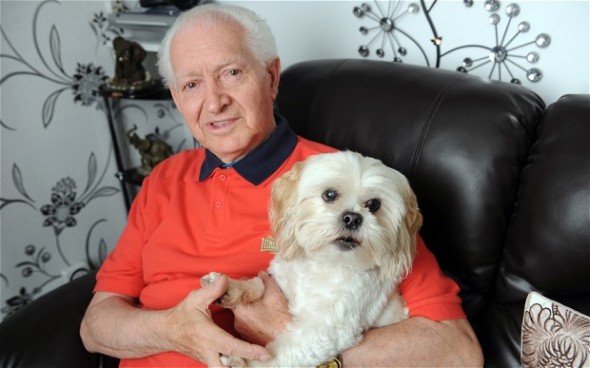 Derek Ramsden was walking with his two dogs, Bruno and Toby, while on vacation in Wales when he slipped off a ridge and into sinking mud. Ramsden, who is 81-years-old, managed to grab onto a railing on the bridge but in was serious trouble. “It was frightening. I could not get out and you can’t hold your grip for long at my age,” he said.

His seven-year-old Lhasa Apso Toby quickly took action. Toby ran a quarter of a mile to alert park security staff. Staff manager Ben Thompson said, “The dog knew what it was doing. It ran past apartments through bushes and alerted security.” Toby barked at the staff and started leading them back towards Ramsden. Toby would run ahead and then stop and wait for security to catch up and then lead them on again. Thanks to Toby the staff found Ramsden and pulled him out, “without the dog we would not have known he was there,” said Thompson.

Ramsden’s wife Ada had become concerned when her husband had not returned after an hour. When she set out to search for him she found him covered in mud and surrounded by park staff. “He was covered in mud from head to foot. If he had let go he could have slipped down further. Toby saved him,” she said. Ramsden only suffered some bruising on his back thanks to Toby’s heroic efforts.

Ramsden is incredibly thankful for Toby, “He’s my very own Lassie.”