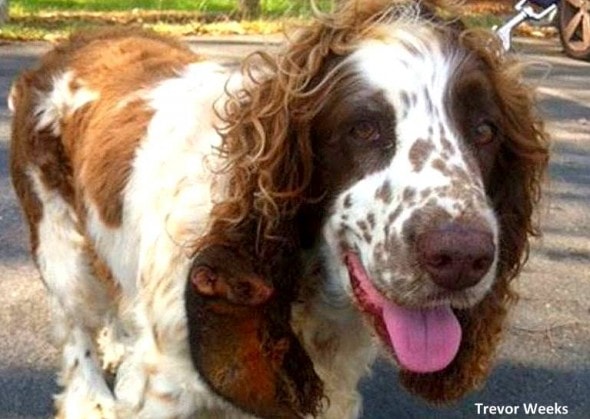 When a young ringtail possum (not opossum) got separated from his family, he became vulnerable to attacks by larger animals.  Some crows spotted what they though was going to be a delicious meal, by were chased off by a heroic Springer Spaniel, who then played dad to the tiny critter.

Chilli was enjoying a nice summer day at the Colmslie Recreational Reserve in Brisbane, Australia with his dad, Trevor Weeks, when the pair heard a murder of crows making a lot of racket, so they went to investigate.

“Chilli took off towards a large gum tree and I then spotted two crows, one attacked a very small object from the front and one from the rear,” Weeks explained to 9 News.  “Chilli, being a springer spaniel, sprung in, the crows flew off.  The object was a very young baby possum.” 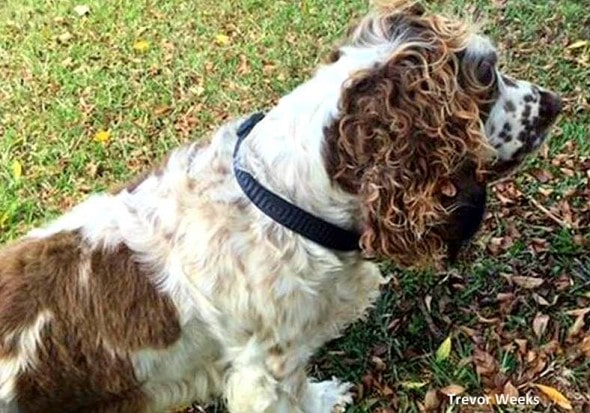 The poor wee thing was clearly relieved, and immediately bonded with its rescuer.  It climbed up and nestled into one of the dog’s long, curly ears.

“Chilli sat very quietly in the car with the baby possum still asleep in his ear,” Weeks said.

He was eventually able to dislodge his dog’s new growth at a veterinarian’s office, where it was examined.  The possum was uninjured, thanks to Chilli’s intervention.

“I was told he would go to a carer till he’s old enough to be set free. Chilli was quite relaxed with the little fella asleep in his ear; he has done similar with young birds that have fallen out of their nests.”

Hopefully because of Chilli it will go on to live a long and healthy life.