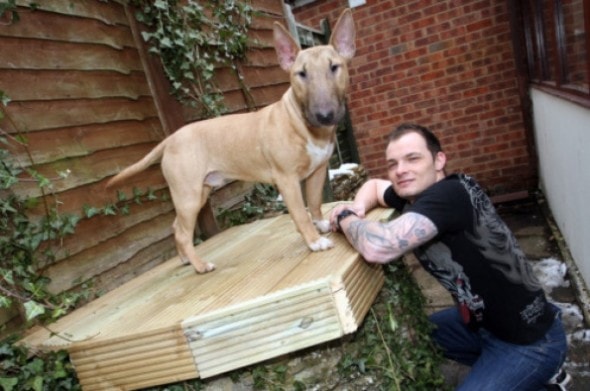 A sheet of ice saved a seven-month-old puppy named Ben from drowning. The Bull Terrier was exploring in his yard when he plunged 20 feet down a well.

Adam cook heard a crashing sound from his back yard and he ran outside in a panic. “I heard a massive crash from the garden,” said Cook. “I went out the back of the house but couldn’t see Ben.” He found Ben had fallen down a deep well which sits behind his home. “I couldn’t believe it,” Cook said. “There was wood there before but it must have perished in the bad weather.”

Luckily for Ben the chilly water in the well had frozen over. Ben was able to keep dry until firefighters arrived to rescue him. Cook says Ben likely wouldn’t have survived if the water hadn’t been frozen over

Firefighters didn’t want to use a ladder to rescue Ben and risk breaking the ice, so they instead set up a tripod and lowered one of the firefighters down into the well to retrieve Ben. “After they got him out I cleaned him off with some towels and he was running around licking the firemen and acting like nothing had happened,” said Cook.

Cook is thankful for the efforts of the firefighters. “The firefighters were a good set of lads an I owe them a massive thank you,” said Cook who has put a more secure covering over the unused well to prevent any further incidents and to protect his adventurous Bull Terrier.