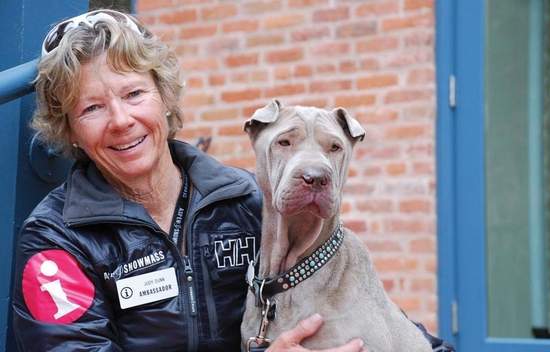 Judy Dunn was walking her 2 dogs at Independence Pass on March 23rd, when Sophie disappeared around a bend.  Sophie is a 4 year old Shar-Pei and she has been missing ever since.  “I was up there until midnight looking for her,” said Dunn, who returned at 7:30 the next morning to resume the search. Temperatures that night dipped to zero in town, she said.  They were only about a half mile from the gate when she got lost.

Dunn called in help from friends who searched relentlessly, put up posters and ads, and even hired a helicopter to search from the air.  It was all to no avail however as she remained lost.  “There were no paw prints that went anywhere — nothing,” she said.

Then on Monday morning, April fools day, Aspen resident Andre Mpitsos was out dog walking at the pass and he spotted Sophie.  He had seen the ads around town and knew who she was immediately.  “About 200 or 300 yards past the gate, I see this little face peering from behind a tree. I said, ‘You want a treat?’ and she came barreling out,” Mpitsos said.

Sophie was in good shape considering she had been on her own for 9 days.  She has some frostbite on her paws and nose and had lost some weight but was otherwise unharmed.  She was very hungry and immediately ate 2 bowls of food and slurped down a bowl of water provided by Mpitsos.  Dunn is just grateful and happy to have her baby back home and is very thankful to all who helped search, especially the man who found her, Andre Mpitsos.  “I was there at the right time, I guess. It was exciting,” he said.