Dingo, a five-year-old German Shepherd, has suffered various injuries – including broken hind legs – during his time as a Marine Corps working dog, and has bounced back every time. Yet he recently found himself in a fight for his life: not in combat, but at the Marine Corps Air Station Cherry Point.  Dingo was bitten by a venomous snake during a training exercise Dec. 5.

During the training exercise Dingo was searching the border of a forest for a simulated criminal. “I noticed a red mark on Dingo’s leg as we were in pursuit of the ‘criminal’,” said Cpl. Stacy K. Chester, a K-9 handler with the military working dogs. “When I noticed his leg I called him off to take a look. It had begun swelling and I immediately rushed him to the vet.” 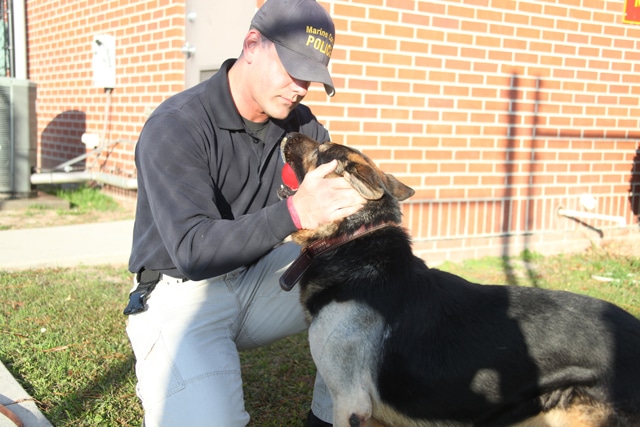 When Chester got Dingo to the air station veterinarian, Capt. Curtis R. Cline, they began to shave the hair on Dingo’s leg, finding a second puncture wound, indicating that Dingo had been bitten by a snake. The vet’s assistants and kennel personnel began calling around to the local area looking for antivenin.

“Most snakes are hibernating at this time of year,” said 2nd Lt. Lloyd T. Hardee, kennel master for the military working dogs. “With the weather changing so drastically over the last month from cold to warm these snakes are waking up thinking they are hungry, and that is what happened to Dingo.”

Hardee explained once a snake awakens from hibernation its instinct is to feed and protect itself. During this period of time venomous snakes don’t have as much control on how much venom they release into a victim. In Dingo’s case, the snake had released a large quantity of venom into his leg causing the swelling to progress quickly.

“When I saw the swelling begin to rush up Dingo’s leg and I knew it was a snake bite, I thought the worst,” said Chester. “After a few phone calls it became apparent no one in the local area had the antivenin we needed for Dingo. I thought I was going to lose my best friend.”

“The Marine Corps is different with the working dog program than the other branches,” said Hardee. “These dogs belong directly to the air station commanding officer. When Col. Zimmerman heard what happened and that we needed to get Dingo treatment and care he needed he said ‘do whatever it takes to get that dog treatment.’”

Cline called his supervisor seeking knowledge and her advice on the situation.

“When I called my supervisor she told me she was in Norfolk and had the antivenin and to have the dog transported there for further treatment and care after he was stabilized,” said Cline.

Hardee then contacted the search and rescue team with Marine Transport Squadron 1 who fly the HH-46 Sea Knights fondly known as Pedro.

“My first thoughts when briefed by our operations section was ‘wait a dog?’” said Capt. Brett Malavenda, a pilot with VMR-1. “After being told that it was a working dog I said, ‘hey we have a Marine bitten, let’s get moving.’ Those dogs are just as important to this base as the Marines. They protect us and detect bombs that could kill hundreds of Marines. I was happy to fly him.”

Chester flew with the VMR-1 crew as they took Dingo to Naval Station Norfolk, Va. Dingo spent the next few days there getting treatment for the bite.

“The whole flight I stood by Dingo hoping and praying we would get to Norfolk in time to save his leg as well as his life,” said Chester. “People don’t realize what these dogs mean to their handlers. Yes, they are our partners when we are investigating locations or standing guard. But we deploy with these K-9’s. While down range in theater we are on our own. We are going out with different platoons and units each time we leave the wire. The only person I know is my dog. These dogs will die for us and us for them.”

Chester and Dingo returned from Norfolk to Cherry Point on Dec. 8. Dingo’s leg was watched over for the next several days to see if there would be any tissue or muscle loss from his encounter with the slithery serpent. Dingo currently has not lost any muscle or tissue.

“Dingo is doing great,” said Hardee. “He is back to his old self. The only problem we face now is to see if he will be able to conduct the tasks needed from him.”

Hardee said when something traumatic happens to a dog they don’t think ‘ok I’ve done this training 200 times and nothing happened.’ They think, ‘hey last time I did this exercise I got bit’ and might not perform the task needed.

“This event has helped all involved from the K-9 unit to VMR-1,” said Cline. “My staff at the vet clinic now knows who has antivenin and who doesn’t. We have a contact with VMR-1 if we need to rush an animal to another location.”

Chester expressed his gratitude for all involved and knows without all their help Dingo’s leg or life would be lost.

“They saved my best friend,” said Chester. “My closest family is over 1,500 miles away. I have friends I work with, but Dingo is my best friend. He knows when I’m having a bad day, when I’m upset and when I am ready to go to work.

“If we had to drive him to get the antivenin I wouldn’t have Dingo here with me right now. I know that without the teamwork shown by VMR-1 and the vets, Dingo would be dead.”