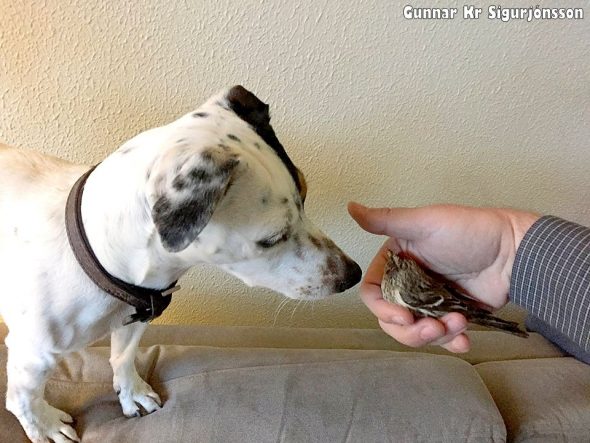 When Diamond saw an injured bird on the balcony of his home in Iceland, he refused to leave his dad alone until he did something about it.  So the man brought the bird inside, and when it was well enough, let it go, but now Diamond is missing the avian acquaintance who once sat atop his head.

Gunnar Kr Sigurjónsson was working on his computer when his Jack Russell trotted in, whined, and turned around, trying to lead him out of the room.

“When I didn’t follow, he came back and whined some more,” he told The Dodo. “I knew he didn’t need to do his business, as we had just been for a walk, so finally I gave in and followed him.”

Diamond bolted over to the door, where Gunnar could see a puny, stupefied bird lying on the balcony.

“I immediately thought the bird was dead, so I called Diamond inside.  Then I thought I saw the bird blink an eye.” 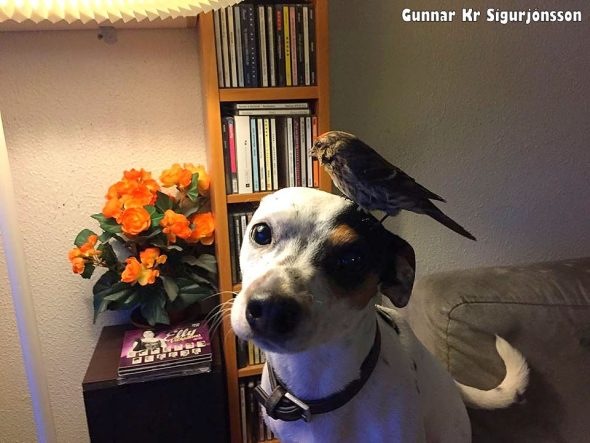 Gunnar brought some cardboard and a basket out to scoop it up, and just as he did, the common redpoll fluttered back to life.  But it clearly needed a little TLC, so he brought it inside.

“I gave him some water and some birdseed I had. After an hour or so, I was going to set him free, but wanted to take some pictures first, so I put it in my open palm and took some snaps,” he explained. “Then he flew a big circle in my living room and landed right on top of Diamond’s head!”

Perhaps it was the bird’s way of saying thank you, and Diamond didn’t seem to mind too much.  The bird, which was named Bíbí, flew up onto a shelf.  Gunnar picked it up to make sure it didn’t get hurt.

“That’s when Diamond came nose to beak to the bird and then he started licking him,” he said. “The poor bird had to flick his wings a few times to keep his balance, but could have flown away any time if he wanted to.”

So he brought Bíbí back outside to see if he was ready to take off outside. 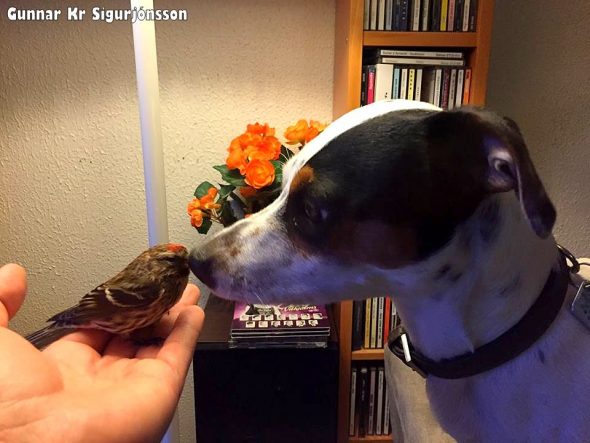 “More than an hour later I looked outside and saw the bird exactly where I had put him.  So I went outside again and picked him up gently and put him back in the basket, with an added bite of sweet potato as well.”

Diamond stood guard over Bíbí throughout the night.  The next day, he was ready to return to the skies.

“I set the bird free around lunchtime the day after and then he flew after a few seconds in my hand, getting some orientation obviously,” Gunnar said.  “And boy, did he fly high up… surely looking for some new adventures.”

While the bird is likely happy to be larking about, Gunnar seems to be missing his wee ward.

“A while after the bird had gone, I said to Diamond, ‘Where is Bíbí?’ He looked at me, very sharply, then he ran directly to the balcony door and jumped on the arm of the sofa, to look out. He knew exactly what I was talking about.”