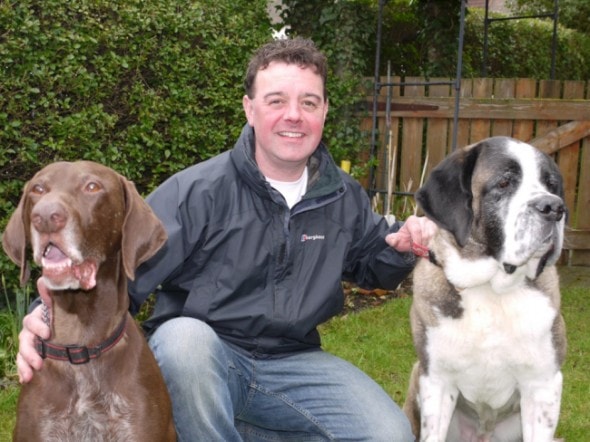 When Samson was rushed to the vet another dog would be the hero to save his life. The Saint Bernard lost a lot of blood while having a twisted spleen removed. Samson lost so much blood that without a lifesaving blood transfusion from a German pointer named Blitz, he wouldn’t be alive today.

When Samson’s owners, Kerry and Chris Waterhouse, noticed the Saint Bernard wasn’t eating, they knew something was wrong. The Waterhouse family had to say goodbye to their dogs Ben, Max and Botham last year. “He wasn’t eating his food, so I knew there was something wrong with him,” said Kerry Waterhouse. “He was taken to the vets just five days after the anniversary of losing Ben. I just thought I couldn’t lose another dog.”

Samson arrived at the Kingston Vets where they removed his twisted spleen. “Samson’s life was in the balance. His twisted spleen was engorged with blood and weighed a staggering 3.5kg when, normally, it should have been about 1kg,” said vet Sharrin Powers.

Though the spleen was successfully removed, Samson lost a lot of blood and needed a blood transfusion fast. “Because of the volume of blood trapped in his spleen and due to the blood loss during surgery, his blood count had dropped severely, so it was vital he received a blood transfusion as soon as possible,” said Powers. Samson was in luck, the vet receptionist’s dog Blitz was a perfect blood match.

Samson is the third dog that Blitz has donated blood to. It took only thirty minutes to take the blood from Blitz and then five hours to complete the transfusion. The Waterhouses have long advocated for pet owners to register their pets to be blood donors. Samson used to be registered, but had to be taken off when it was discovered he had a heart murmur.

The Waterhouses are extremely grateful for Blitz’s blood donation, though Samson might not share the same gratitude. When the two dogs were reunited for a photo-op the St. Bernard wasn’t too happy. “He’s not aggressive, just a big grumpy,” said Kerry Waterhouse, who further explained that after years of having smaller dogs come up and bark at him he’s not keen on making new dog friends. “Samson also won’t know what happened and what Blitz has done,” she said. “He was asleep when it happened and woke up with a sore tummy.”