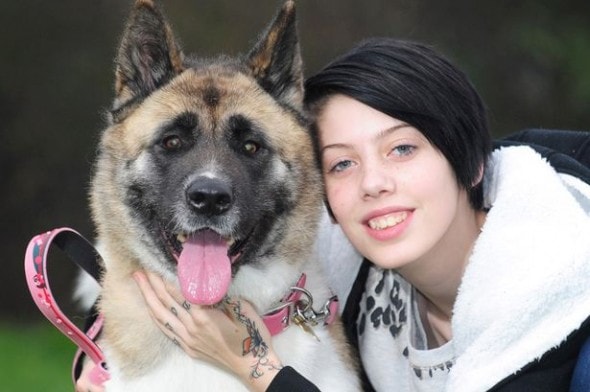 When 18-year-old Aysha Perry began choking on her dinner her dog Sheba came to the rescue. Sheba jumped on Aysha’s back, hitting her with her paw, and saved Aysha.

Aysha was eating her dinner in front of the television when a piece of meat became lodged in her throat. She was struggling to breath and beginning to lose consciousness. With her roommate gone, she was home alone except for her four-year-old dog Sheba. Aysha was fearing the worst when Sheba came running to the rescue, “She wacked me on the back with one of her huge front paws and the piece of chicken flew out.” Sheba began licking Aysha’s face, making sure she was okay.

Aysha has only had Sheba for two weeks, but Sheba’s actions saved Aysha’s life. Sheba is a Japanese Akita, a breed known for their protective nature. Aysha is thankful for the quick bond that she has developed with Sheba. “I think she deserves some recognition because it was a very heroic act. I don’t know anyone else whose dog would do something like that,” Aysha said.