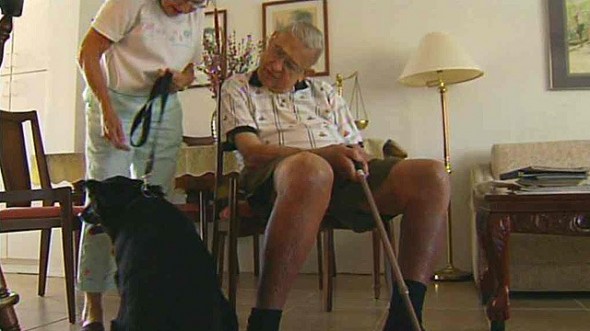 When 88-year-old Jim Treece fell in his backyard he yelled for help. The only one who heard him and the one Treece credits as his hero was his neighbor’s dog Chips.

Treece was working on his lawn at his Sun City, Arizona home last month. As he made his way back towards his house he stumbled and fell. Treece started calling for help but no human heard him.

Chips and his owner Bonnie Dodson had only recently moved to Arizona from Georgia. Chips had been and abandoned and abused stray when Dodson took him in. Now the once abused and neglected dog would be the hero Treece needed.

Chips was the only one who heard Treece’s call for help.  Chips started whining and barking nonstop until his Dodson got up from watching television to see what the fuss was about. Dodson followed Chip outside where he led her straight to Treece, who was in a very dangerous position.

“He was in the stones. 105 degrees, and the stones were burning him,” said Dodson. “If it hadn’t been for Chips crying, I wouldn’t have known he was down.”

Dodson called 911 and paramedics quickly arrived to help Treece, who luckily at that point had only suffered some scrapes. Without Chips, Treece could have been stuck there for hours and suffered serious injury or even death in the Arizona heat.