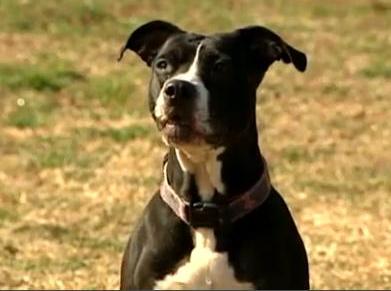 Last Tuesday when Westenberger’s home of seventeen years was overcome with smoke and flames the hero that saved the day was a ten-year-old pit bull named Baby.

Rhonda Westenberger and her sister Evelyn were sound asleep unaware that their lives were being threatened when Baby went into action. Baby started barking and pouncing on the two until Evelyn woke up just in time. “There were flames shooting down the hallway,” Rhonda said. “If Baby hadn’t woken Evelyn up, I don’t think either one of us would have come out of it.” Both Rhonda and Evelyn ran out of the burning home but there were still other members of the family in danger, the Westenberger’s five other dogs.

Baby didn’t let her fellow dogs down. She ran back into the burning home to save them, even dragging one of them out to safety. “There was one hiding underneath the bed,” said family member Charles Land. “Baby actually went in there grabbed it by the neck and drug it outside.”

The family lost their home but thanks to Baby they have a lot to be thankful for. “It brings my spirits up a lot to see the dogs,” said Rhonda. “I’m so proud of her. She’s my hero. She’s the hero for all of us.”