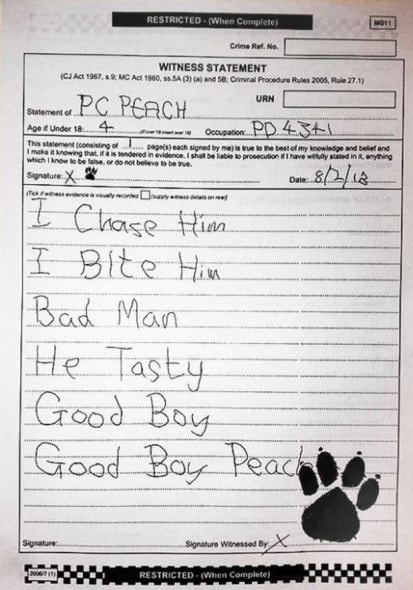 CPS requested a witness statement from “PC Peach”. What they didn’t realize is that Peach was actually PD Peach, a police dog that had been at the scene. Officers at West Midland Police station wrote back to explain that Peach was a dog, but it was of no use. So the officers decided to have some fun with it and completed a witness statement for Peach and put it on the wall at the station for the amusement of the other officers.

The statement read, “I Chase Him. I Bite Him. Bad Man. He Tasty. Good Boy. Good Boy Peach.” It is signed with a paw print. The officers got into some trouble though when one officer decided to share a photo of the statement on social media.

CPS failed to see the humor and the matter is being investigated by the Professional Standards Department.  “It’s a difficult time for police and sometimes humor is a way of venting frustrations,” said Ian Edwards, chairman of the West Midlands branch of the Police Federation. “I would urge our Professional Standards Department to be even-handed in the way they deal with it.”