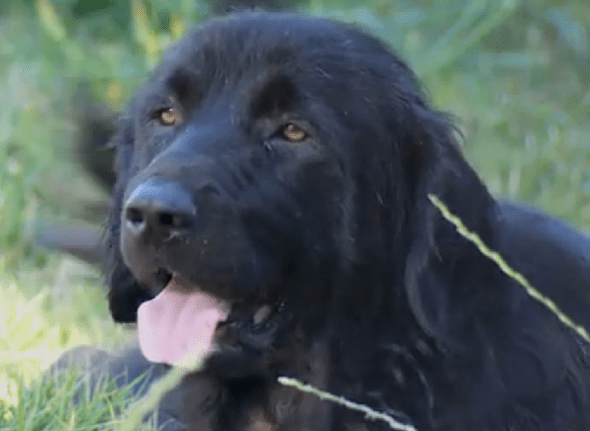 When a man jumped out of a bush and tried to attack a woman walking her dogs last week one of her dogs came to her rescue and chased the attacker away.

Last Thursday, Kelsey Short was taking her two dogs for a walk along the Cowlitz River when a man jumped out from some bushes and tried to take her cellphone from her hand. The man wasn’t prepared for how protective Short’s sweet looking lab mix Zug would be.

“My dog jumped and bit onto is arm,” said Short. “The man got away and he jumped on him again and bit him and then chased after him.”

Even when the man tried to run away, Zug didn’t let up.

“Then the guy went to run and the dog lunged on his back and got him by the back,” said Short.

The man did managed to get away, but no harm was caused to Short or her dogs. Short is now giving lots of extra treats and attention to Zug for being her hero. Short rescued Zug from a shelter a year and a half ago and he has more than returned the favor.

Police are still looking for the attacker. He had shaggy blond hair, scruffy facial hair, was wearing khaki shorts and no shirt or shoes. He should have two dog bites, one on his upper arm and one on his shoulder. If anyone has any information they are asked to call (360) 274-4711 ext. 504.