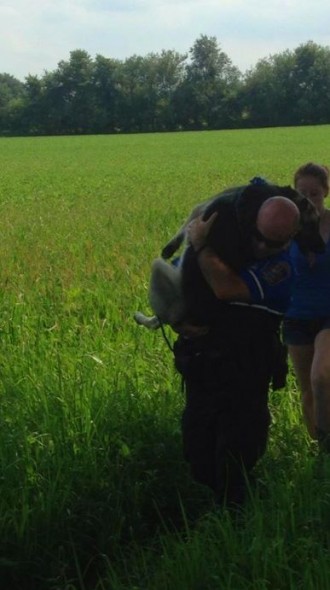 A German shepherd was lucky to survive a car crash this past Sunday. He was even luckier that police officer Nick Ague came to her rescue after the crash and carried the scared and injured dog on his back.

A car accident on Sunday afternoon in Pennsylvania caused two dogs to get loose. A border collie was caught almost immediately, but the German shepherd named Mya ran almost two miles away from the accident. South Londonderry Township Patrolman Ague was determined to help the dog.

“I own a German shepherd myself and I know how devastated I would feel if I never saw my dog again or knew my dog was struck by a car,” said Ague.

When Ague and other officers found Ague it was discovered she could no longer walk. Mya had injured the pads of her paws while she ran from the accident scene. So Ague picked the 75-pound dog up and carried her 200 yards.

A photo of Ague carrying Mya has recieved thousands of likes on Facebook, with many people calling him a hero. Ague doesn’t see himself that way though.

“I don’t consider myself a hero…I was just doing what I would want someone to do for my dog,” said Ague.