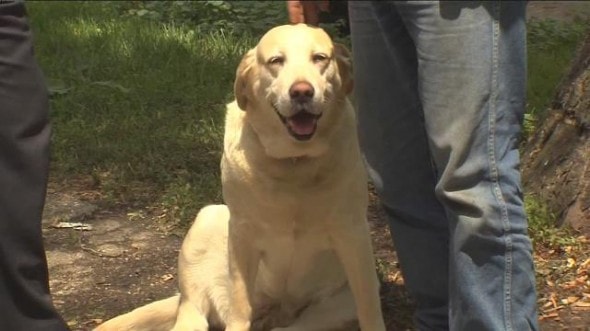 A Wisconsin man narrowly escaped a raging fire in his home earlier this week. If it wasn’t for his yellow lab Reba he wouldn’t of made it out alive.

On Wednesday night Dan Peterson’s power went out during the major thunderstorms that tore through the Midwest. With no power Peterson decided to go to bed. A little over an hour after he went to bed Peterson woke up to Reba barking.

“The dog woke me up she was barking. Going nuts,” said Peterson.

Reba was going nuts because just feet away in Peterson’s living room there was a raging fire that was quickly filling the home with smoke. Peterson could barely see anything, but managed to find his way out. He and Reba got out safely before it was too late.

“Fire. Smoke. Everything. I just went to the nearest door. I don’t even know what door I went out. I couldn’t see, couldn’t do nothing,” said Peterson. “She saved my life.”

Firefighters are still trying to determine the cause of the fire, but Peterson’s home is most likely a total loss. Peterson is happy to be safe and even though he lost all his belongings he is thrilled to still have Reba, his hero.