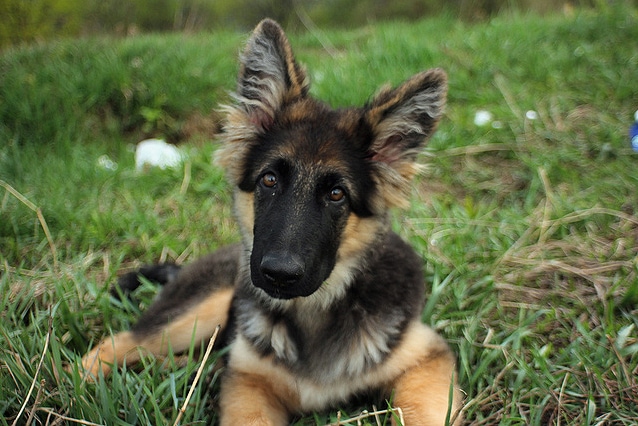 A pregnant California woman says she and her unborn baby have a loyal German Shepherd puppy to thank for saving them from a violent attacker.

Sarah Day told 10News she was at home with her 10-month-old daughter when she heard a noise in her garage. When she went to see what caused it, she was attacked by an intruder.

“I got hit in the back of the head once with a blunt object,” she said. “I turned around and he hit me three more times across the forehead with a blunt metal object – once in the eye – and I fell straight back on my tailbone.”

Day said she tried to protect her abdomen to prevent her unborn child from being injured. “I curled up in a fetal position to protect my baby because there was nothing else I could do,” she said.

After she was kicked in the ribs Day screamed – that’s when her puppy Sitka took notice and came to her rescue.

“I was screaming and my dog Sitka came out and started barking at him and he grabbed me in the face and called me a slut and a whore, and then he slammed my head down and said I was lucky and that he’d be back,” she said.

Day said 12-week-old Sitka became agitated and went after the intruder. That was enough to send him running. Day’s husband, who was not home to protect his wife when the incident occurred, says his dogs are heroes.

“There’s no telling what would have happened if the dogs weren’t here,” said Day’s husband, Colten. “It could have been a lot worse. My dogs will never be locked up.”