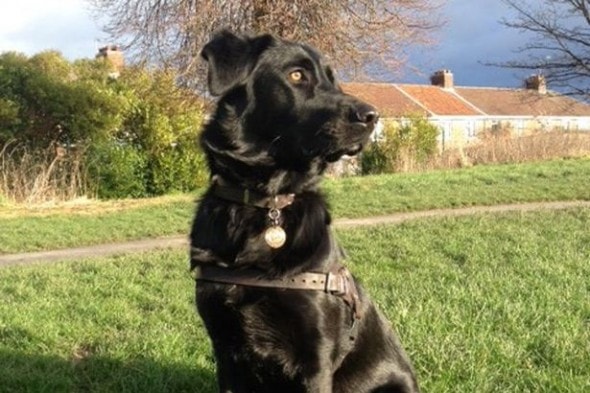 When Lesley Hailwood began choking on a chocolate New Year’s Eve her dog Nell came to the rescue and pounced on her chest. Nell’s quick action saved Hailwood’s life.

Nell is in training to be a guide dog and is living with Hailwood while undergoing her training. Although almost complete with her training Nell did something on New Year’s Eve she hadn’t been trained to do.

Nell was sound asleep when Hailwood grabbed a chocolate and ate it. The chocolate became stuck in her windpipe and no matter what she tried she couldn’t get it out. While choking Hailwood walked into the living room where Nell was sleeping, but soon Nell sprang into action.

“She had obviously heard me, and jumped up, ran past me, jumped on the settee, which is not what she does at all,” said Hailwood.

Once on the settee Nell got onto her hind legs and using her two front paws she lurched at Hailwood hitting her directly on the chest. The impact dislodged the chocolate and saved Hailwood’s life.

“The more I tell the story the more I wonder how she knew to do that,” said Hailwood. “It was instantaneous, she didn’t panic or anything. It was immediate what she did.”

It will be hard for Hailwood to part with Nell when she is complete with her training, but Nell definitely won’t be forgotten by Hailwood.

“I wish I could keep her. That won’t happen. She has to do the job she’s trained to do,” said Hailwood. “But because of what she’s done she’ll always be a bit special for me.”