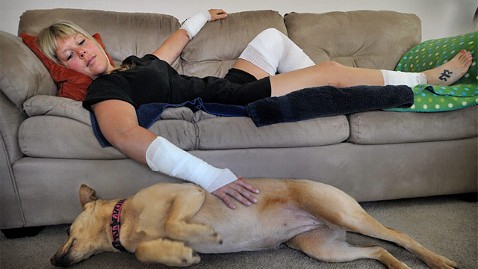 A woman in Washington state is recovering from a brutal attack by 5 raccoons that left her with 16 puncture wounds and 100 scratches. Michaela Lee was walking her dog in a Tacoma park when it chased two raccoons.

They ran up a tree with her dog in pursuit – and came back down with reinforcements. “I didn’t think they were going to attack me,” said Michaela Lee. “I thought they were just trying to chase me off, you know, their tree.”

“They scratched and bit so hard that it is bruised all the way underneath and they tore away big chunks of skin,” Lee said.

Neighbors heard Lee screaming for help. The injured woman says it felt like the attack would never stop. “I’m down on the ground, I’m bleeding, I’m going into shock, my teeth are chattering,” she said.

It did finally stop – thanks to Lee’s dog. Maddy came back to her, positioned herself between her owner and the raccoons, and bared her teeth and growled – and scared away the attacking animals.

Lee says Maddy is her hero. She also maintains that the attack would have had more serious ramifications had her dog not stood up to her attackers. She worries for other pet owners in the area.

“If it were anyone who was less athletic or able to get up I’m worried that it could have been fatal” she said.