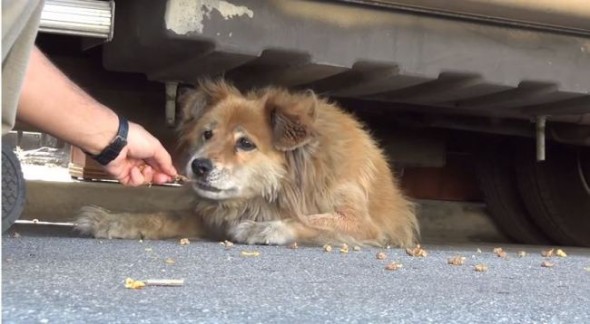 Eldad is at it again – this time a dog, who he named Sonya, was rescued after being spotted on Google Maps and reported to Hope for Paws.

Jennifer Velasquez had seen the dog on the map outside of an abandoned building, and quickly contacted the Los Angeles-based group.

“You can actually see her on Google Street View,” she said.

A man named Patrick had seen Sonya on the street, and had begun feeding her about six months prior to Jennifer’s discovery. They weren’t sure what to do about her, but after seeing the video on Fiona, they knew just who could help. 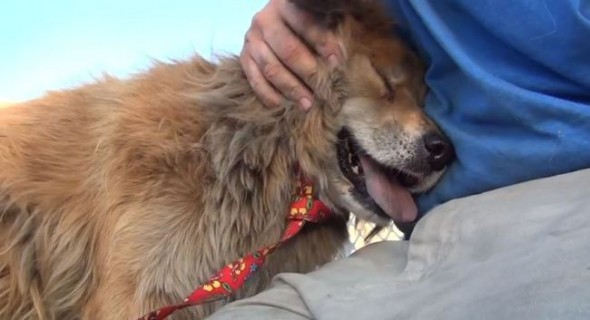 Eldad Hagar responded to the call, and found the timid dog right in the area where she had been seen. One business owner said he had seen her there for ten years!

Sonya was hiding beneath a camper van, but wasn’t too afraid to accept bits of the cheeseburger that was offered. She ventured out from under the truck, and over to the parking lot where she could be contained. She was scared, and would not allow herself to be captured, but Eldad finally got her. 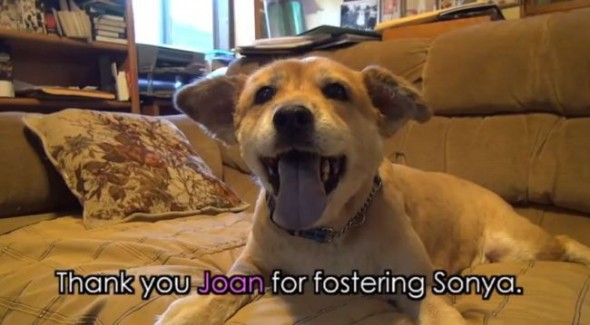 The dog was desperate for affection, and soon began nuzzling up to her hero. She was taken to a groomer where she was bathed and had matted fur trimmed away.  Broken teeth and ingrown dew claws could then be seen.

The next visit was to the vet, who determined that she had arthritis and several tumors. She was given the necessary medical treatment and placed into foster care.

A recent update from YouTube user Kingpitty1 states: “Sonya is having some problems with the bone spurs in her back & the vet said it could lead to paralysis. She is too old for surgery and that type of surgery is iffy even on a young dog. We have started her on new meds & have started acupuncture. She seems tobe responding well to her first session. The vet said if she were still on the street she probably wouldn’t be walking. Sonya is doing good & is happy as ever. Please send her good thoughts & we will take great care of her.”