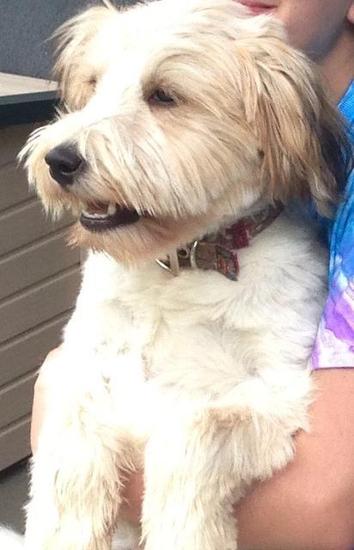 After being taken in carjacking on Monday Cooper is now safe at home thanks to the help of the community in Kansas City.

Dr. Greg Horton was eating lunch in his car with his dog Cooper on Monday when a robber pretending to have a gun stole the car with the dog still inside. Police were able to locate the car later that day and arrest the man responsible, but Cooper was no longer inside.

Martin Trujillo had spotted Cooper early Tuesday morning at a gas station that was only a few miles away from where the carjacking took place. Cooper was standing by the door of the gas station cold and shivering trying to get inside to get warm. The gas station employee kept shooing Cooper away but Trujillo stepped in to help.

He texted pictures of Cooper to his wife Liz and expressed that he didn’t want to leave him there. She told him to bring him home. The family gave him food water and let him rest comfortably. Then Liz Trujillo was on Facebook when she saw a post about the carjacking and recognized the dog police were talking about.

“I knew right away, this is the dog I have,” said Liz Trujillo. “I was so happy to find the owner. You could tell (Cooper) came from a good home.”

“I only did what I hope someone would do if my dog was missing,” said Liz Trujillo.