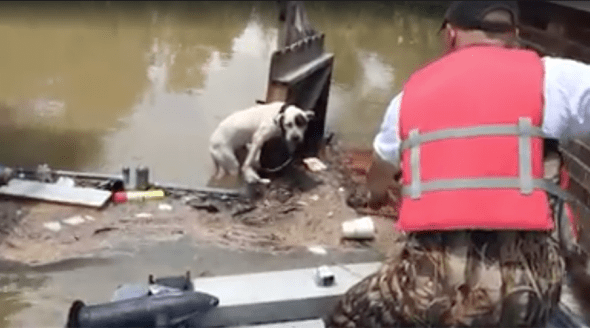 With all of the flooding going on in Louisiana, it’s no small wonder that there are many dogs left in the aftermath needing rescue.  In this video, a dog that was clinging to a broken fence in an effort to stay above the water was finally rescued by some wonderful people helping out with the efforts in the area.

You can see the fear in the dog’s eyes and he tries desperately tries not to go under.  However, once rescue was in sight, there was an obvious shift in the dog.  Once the rescue team finally gets him on the boat, the dog just collapses in a heap.  One could only imagine the terror the dog must have felt with every passing moment.

So far, there’s been about 40,000 homes lost in the flooding, and about 13 people have died.  None of these numbers are official, as many of the areas that have been hit the hardest have yet to be fully scoped out.  Thankfully, there are people like this out there, helping to rescue all the dogs left behind.