Maddy and Winston are a pair of therapy dogs from Cape Elizabeth, Maine and are also newlyweds thanks to their human best friend, Andy Brooking.  The two dogs are a part of the Read to a Dog program at the Thomas Memorial Library, where Andy is frequently in attendance.  He put the whole wedding together, and even managed to turn it into a charity fundraiser for the Animal Welfare League.

“I saw a poster of Maddy and Winston. I looked carefully and their paws were like this. I was like, ‘hmm that’s a good idea, I think they’re in love,’” said Andy.  “Maybe Maddy and Winston could get married.”

Andy will be a fifth grader this upcoming school year, and he also has Autism.  That’s how he became part of the Read to a Dog program, and where and when he met Maddy.  The two have been a dynamic duo ever since.

Not only did Andy throw his two furry best friends a wedding, he also saw an opportunity to possibly raise some much needed funding for his local Animal Welfare League.  His hope was to do anything that he could to help make sure that other dogs also have a chance to find a forever match, just like his buddies from the program. 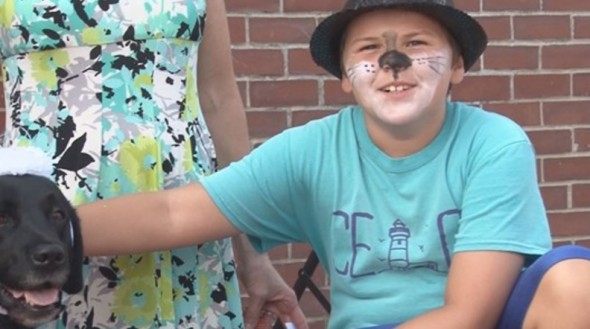