On Jan. 11, 2014, Buddy, an eight-year-old Rottweiler, went out on a walk with his owner at Langstone Harbour, by Hayling Island near Portsmouth, England. The tide was low and the dog wandered into the dry creek, getting stuck chest-high in the mud. Rescuers were called and the pet was pulled just in time for the rising tide. 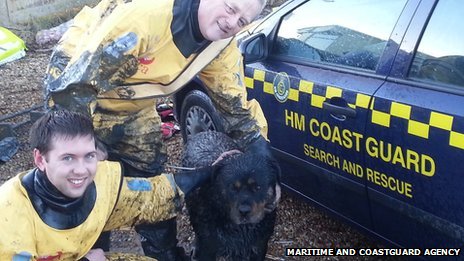 While the dog was trapped in the mud, his owner did not know what to do to help. Another walker called authorities and the Solent Coastguard was dispatched to the rescue the canine.

According to BBC News, a dog handler from Hampshire police helped the Hayling Island and Portsmouth coastguard with the rescue.

“The owner was very upset to see her dog’s predicament and we were concerned because the tide was starting to flood the creek,” said Steve Duff, Portsmouth coastguard sector manager. “The teams had to work very quickly to get the dog out and put him in a stretcher. We managed to get Buddy extracted in the nick of time, just as the water was starting to lap at our boots.”

Rescuers washed the mud off of Buddy and wrapped him in blankets. He was then reunited with his owner and both headed home.

It is believed the pet did not suffer any injuries from this incident, but the four-legged friend was very scared, as was the pet owner.