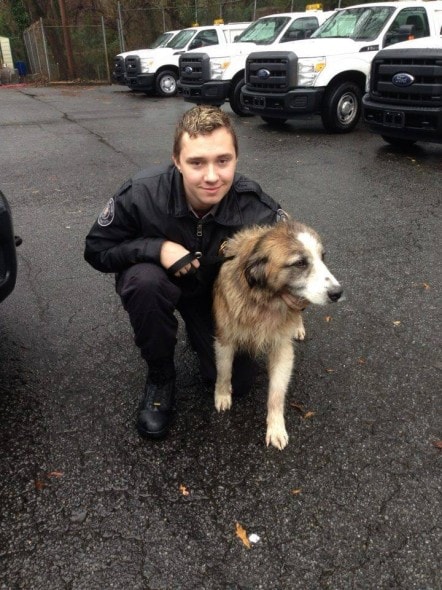 An animal control officer in Atlanta, Georgia saved the life of a dog that was left abandoned in a creek. The water level was high due to recent heavy rains and the dog was struggling to keep his head above water when the officer came to his rescue.

Fulton County Animal Control Officer Anthony Defore was patrolling along the Peachtree Creek when he spotted something moving in the water. He went to take a closer look and realized a dog was struggling to keep its head above water. The water was rising and Defore had to make a quick decision.

“I had to make a decision to either call for the fire department and hope they get there soon or go in,” Defore wrote on Friends of Fulton County Animal Services’ Facebook Page. “I chose not to chance it and go in after him.”

Defore went into the cold creek water and held the dog up while he untied the rope from the tree. Once he had the dog safely out of the river Defore calmed the dog down and did his best to dry him off and get him warm before rushing him to the shelter.

The dog was given the name River and checked over once at the shelter. He was diagnosed with heart worms but had clearly been owned by someone as he had a microchip and was neutered. No one has stepped up to claim him though and he is now up for adoption.

Defore can’t understand why someone would abandon River, but he stated that rescuing River is why he does his job.