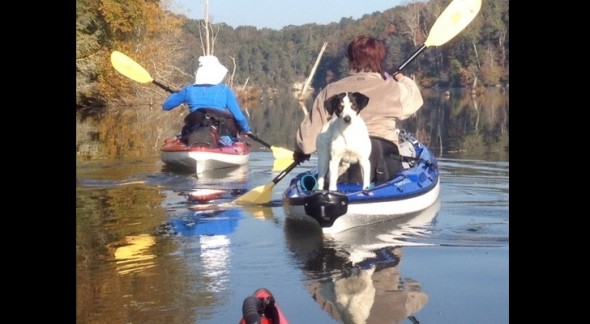 When three women set out Saturday afternoon for the Tellico River, they didn’t exactly expect things to turn into a full blown rescue mission.  They are now considered heroes in their home town after bringing a frightened dog stranded on a log in the middle of the river.

One of the women on the river kayaking, Teri Cox said, “My friend Dee saw something over on the side of the river.  We weren’t sure what it was, so when we packed up, we went to go check it out.  It turned out to be this little guy on a log a couple of feet from the edge of the water.”

The dog’s name was Kenny, and Cox was sure that this was somebody’s missing dog.

“We were in “sit-inside” kayaks.  Because of that, we weren’t able to do anything about it.  So, we went on and we were trying to think how we could have somebody come and get him,” said Cox.

It was decided that the women would get themselves ashore and get back to their vehicles.  They made the tough choice to leave, knowing the dog very well could be in danger, and get the equipment that they would need to pull him out of the river.

When they got back, they kayaked straight to where they last saw Kenny, and he was thankfully still there.  To their surprise, he was seemingly okay, and very much ready for a rescue.

“We finally tied my boat to my friend Dee’s and she paddled the last part of the distance so that Kenny could put his head under my arm and be somewhat comforted,” said Cox.

After the rescue, Kenny was brought to the Monroe County Animal Shelter.  Kenny is doing just fine now.

Kenny will be kept at the shelter for the prerequisite three day holding for his human or humans to come and claim him.  After that, the shelter will put Kenny up for adoption.

Thanks to these three women and their quick thinking, Kenny is alive and well, and is going to be okay.  Nice work, ladies!