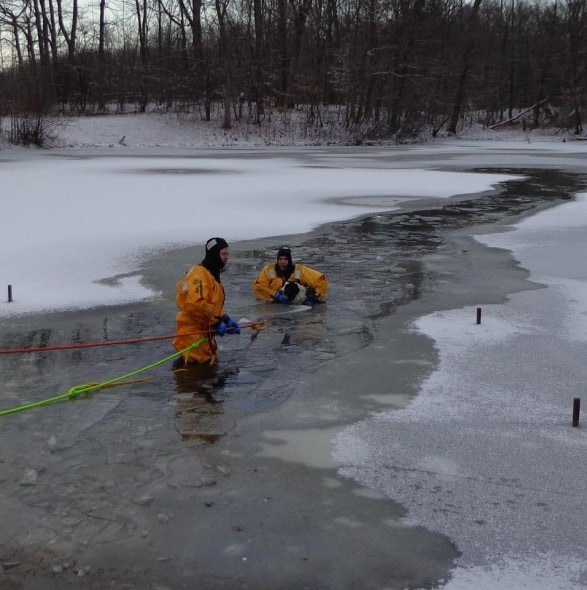 Bobby, a 13-year-old border collie, is safe thanks to the efforts of firefighters in Bath County, Ohio. Bobby spent almost 45 minutes is a semi-frozen pond before being brought to safety.

On Thursday morning around 8 a.m. a neighbor, Victor Simonetta, spotted Bobby in a backyard pond. Bobby was in clear distress after falling through the ice. “He was trying to get out, but as time went on, he swam less and less and you could see he was getting fatigued,” said Simonetta.

Simonetta called 911 for help and firefighters from Bath Township arrived on the scene. Firefighter Stephen Schultz put on an ice rescue suit and started to break the ice to get to Bobby. “I got a rope, tied into it and started breaking through the ice to get to the dog,” said Schultz. Once Schultz reached Bobby, other firefighters pulled them to safety. In total the rescue took only five minutes.

“It felt good,” said Schultz. “The dog looked happy that I was there. He appeared to be exhausted and just wanted to get out.” Firefighters transported Bobby to the vet where he was treated for hypothermia. Dr. Megan Vessaio was monitoring Bobby throughout the day and stated that the Bobby’s body temperature had dropped to 91.6 degrees, around 8 degrees below normal. “It’s pretty amazing, given his age, he was able to fight and swim for that amount of time,” said Vessalo.

Bobby’s owner, Sheran Dray, is very thankful to the firefighters for saving Bobby and visited them on Thursday afternoon to thank them in person. “It’s just amazing that a person would risk their own life to go in after our dog,” said Dray.