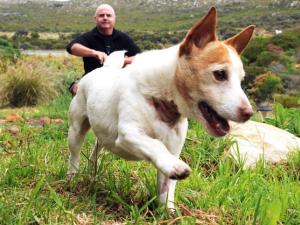 A Cape Town dog narrowly escaped death last week after he was bitten by a poisonous snake.  Sparky, the 7 year old fox terrier was up to his usual antics, playing happily with other dogs while out on a walk.  That’s when he came upon the the puff adder, a venomous snake species found in Africa and the southern Arabian Peninsula.  Never one to back down from a challenge, Sparky  engaged the snake but lost this battle and was bitten on the cheek.

Sparky’s owner, Craig Doonan, rushed his the pooch to the vet immediately, but by the time they got there his tongue has swollen so much that he could hardly breathe.  “The prognosis wasn’t good,” said Doonan. “He wasn’t stable and even if he survived the vet warned that he would lose his tongue… And I would’ve had to make a difficult decision.”

The vet performed an emergency tracheotomy which creates an opening through the neck into the trachea (windpipe).  He then inserted a tube which would allow Sparky to breathe and treated him with anti-venoms.  It was a long, tense night in ICU for the sick dog, and the next day things things seemed to be the same.  “But then as I moved around I saw that his tongue had gone back to normal and he was able to open and close his mouth,” said Doonan.

Fortunately, and against all odds, it was a speedy recovery for Sparky, and within a week he was out and about playing and behaving like his old self.  Vets and nurses told Doonan that it was a miracle and Doonan is one happy and grateful dog owner today.